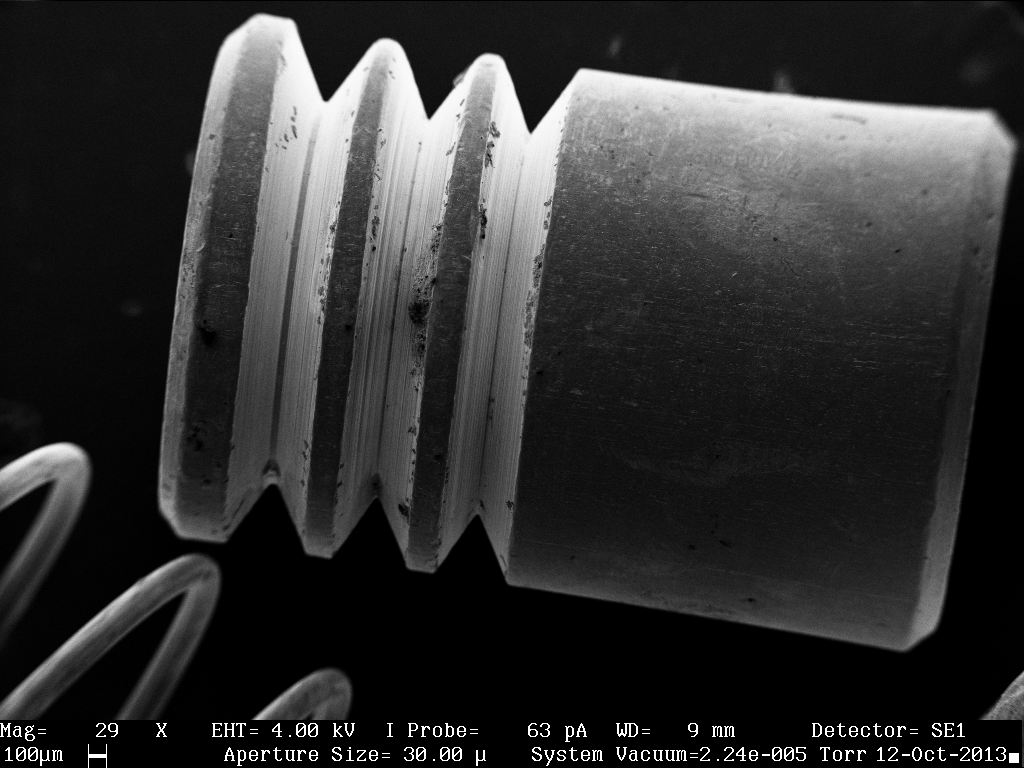 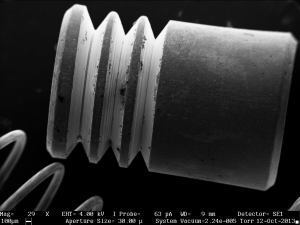 Back in October, Pumping Station: One hosted an event called Locktoberfest, an annual event run by the Chicago chapter of TOOOL (The Open Organisation Of Lockpickers.) It features, well, lockpicking, beer, and brats. (The beer is necessary to relax one’s hands. Really. I mean it.) A number of nationally known people came out to Chicago for this, including Deviant Ollam and Babak Javadi.

Lock picking involves manipulating small components. Small metal components, which are conductive, and would image well in a scanning electron microscope. And it just so happens that we’re probably the only hackerspace with a working SEM.

This also got me thinking that we could do a bit of science. Picking a lock supposedly puts considerable wear and tear on that lock, which is why TOOOL recommends that one should not pick locks one depends upon for security. Well, can that wear and tear be visualized? 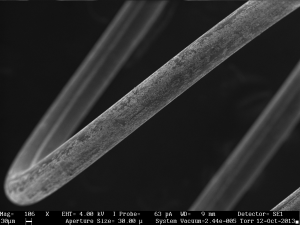 At the TOOOL meeting preceding Locktoberfest, one member bought new lock cores. Of these, we did some experiments on the locks, including passing some of them around to the members present at the meeting who picked them. Later, Steve disassembled the locks for me, removing the pins.

Samples in an SEM have to survive a very high vacuum without outgassing, and as such need to be kept clean. While we now have an ultrasonic cleaner that would have done a much better job, the best I could do was to swirl the lock pins, as well as other assorted objects like a serrated high security driver pin (see the first image) and a spring (see the second image, which shows depth of field) in a beaker of acetone. Then, I used double sided carbon tape to affix the pins to an aluminum sample stub, placed it in the chamber, and pumped it down to vacuum. 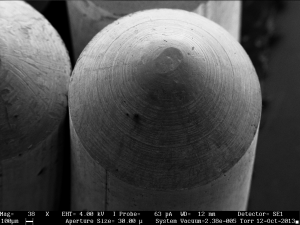 I used a new lock pin, pictured at left, as a control sample. It shows visible concentric circles where it was most likely manufactured on a lathe. “New” isn’t exactly true, because to assemble and disassemble the lock, one must first use a key. The lock pin does show marks I’d associate with key use, as they are straight lines running roughly radially. 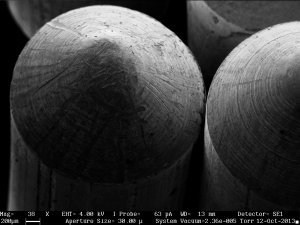 However, the image of a pin that was picked repeatedly, shown at right, illustrates a very different wear pattern. It contains fairly deep gouges. And they do not appear regularly formed, seeing as they originated due to random picking and raking motions inside the lock itself. The marks appear very different than those caused by key use.

At the Locktoberfest event itself, I was able to demonstrate this difference to those attending. This is exactly the kind of niche a SEM in a hackerspace can fill. It is a great tool for science education, and it can provide us with practical information about our projects.

In the words of #SarcasticRover, “Let’s do a science!”