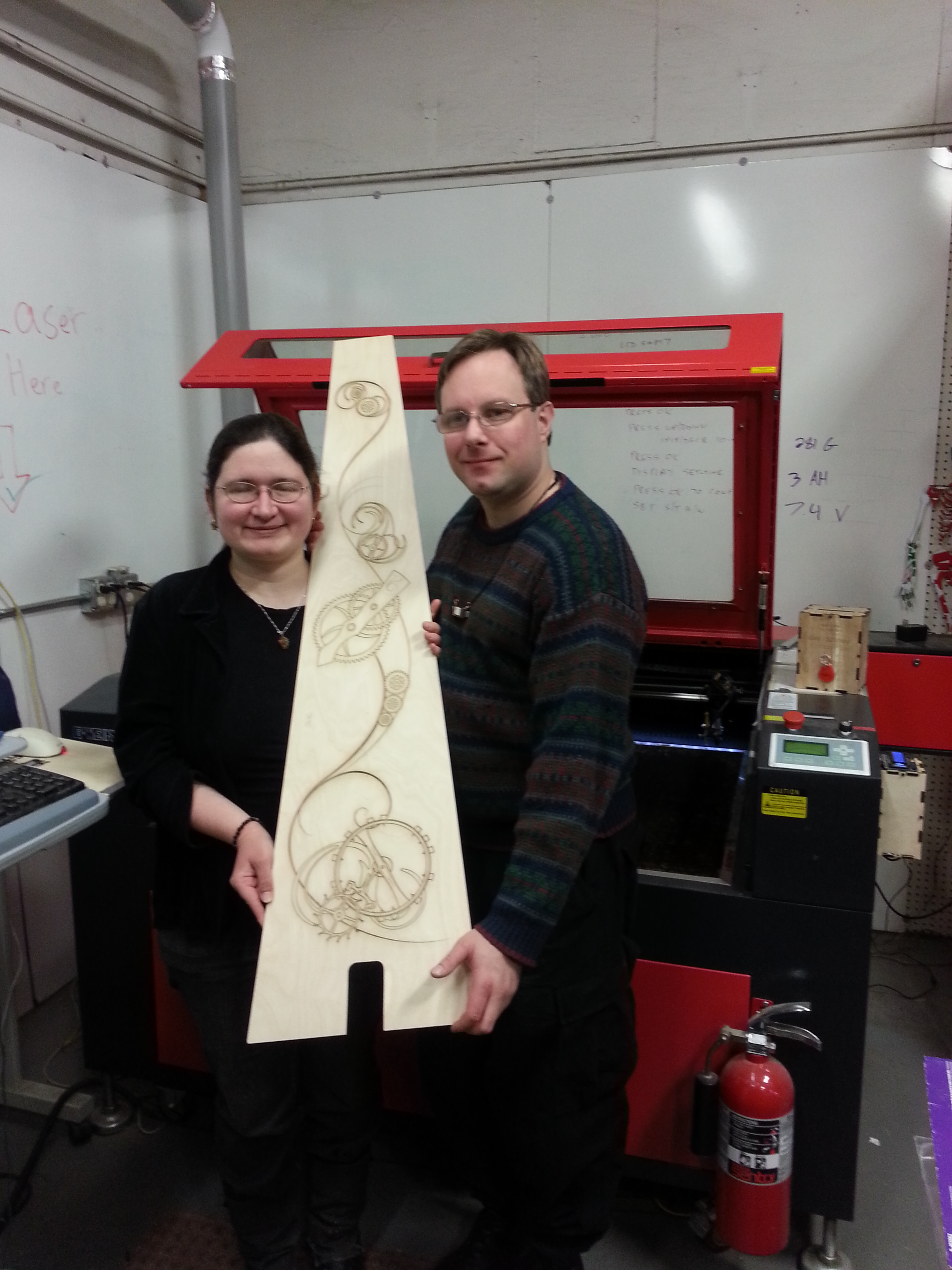 The sound board of the harp had always been the wild card. Elizabeth and I began the project last year knowing that we’d want to use a laser cutter to etch it with some kind of Victorianesque steampunk design involving gears. And we knew that PS:One’s Epilog, with its 24″ x 12″ bed and no feedthrough capability, simply couldn’t fit a 49″ sound board. While design focused on the brass panels, as we did have access to a CNC router, the sound board was left for later, especially because we didn’t know if we could find a smaller laser cutter with feedthrough, meaning we needed a design that could be etched in pieces, or a large laser cutter that could engrave the entire sound board at once.

Elizabeth and I were planning a trip to Madison, WI, and we heard rumors that Sector67 had a colossal Chinese import laser cutter. I reached out to them asking if they would be willing to help with this project, and Chris Meyer, director of Sector 67, responded, inviting us to their space. Knowing what we had to work with, Elizabeth was able to create the design in Adobe Illustrator.

Because the front of the harp is symmetric, any error positioning the sound board in the laser cutter would be blatantly obvious. So she opted for something asymmetric. Her jewelry making is heavily influenced by the Art Nouveau movement, and, given that it began in the Victorian period, it would be perfect for steampunk. The lower part features the escapement mechanism of a watch, and other gears, functional and stylized, are blended in with the flowing design. Although I don’t know if she intended it, the design has parts that look subtly like peacock feathers.

So we got to Sector67. It blew our minds away. And we happened to bump  into Toba from PS:One who was there as well. Small world! Joe Kerman showed us around, and worked with Elizabeth to set up the design using the proprietary Chinese software that seemed powerful, if not necessarily user friendly. The file was in vector format, but ultimately we saved it as a bitmap to send to the  laser. We had a sound board scrap and through some experimentation (too burned, barely burned, just right….) found the power settings. The laser itself uses a 150 watt water cooled tube, although Sector 67 limits it to 120 watts to increase its life. It supports a cutting area of 1200 mm x 900 mm, slightly less than 4′ wide, but for thin material, it can support feedthrough.

Positioning the workpiece was fairly straightforward. I’d worried about how to clamp down the board, as the aircraft spruce plywood sound board was visibly warped. But the honeycomb bed of the laser is steel, so hard drive magnets held it down brilliantly. And the laser has a mode where it moves the cutting head in an outline around the workpiece. Joe started the job before heading out, and Elizabeth and I took turns watching it. (Apparently a similar laser in Atlanta was left unattended, the air compressor failed, it caught fire, and nearly burned everything down!) The space’s cat Tesla also inspected our work as well. And after a little over an hour, the end result? Beautiful! We paid them for the laser time (they have an Arduino that measures it and bills people) as well as the pizza, ice cream, and locally made cola we consumed, and went on our way.

Thanks Chris, Joe, and Sector67! You guys rock! And… I want one of these for PS:One!