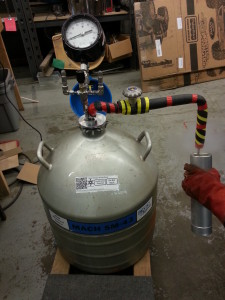 Liquid nitrogen (LN2) rocks. Yes, officially speaking, I need to get liquid nitrogen at PS:One so that we can do serious sciencey stuff, like, say, energy dispersive X-ray spectroscopy on the scanning electron microscope. But, unofficially? Driving nails into wood with a frozen banana, or making ice cream, is just plain awesome. And the clouds of chilled water vapor billowing out of flasks like something from a mad scientist’s lab… what can I say, I’m easily amused.

First, we need a source to buy LN2. Fortunately, a very generous individual, who happens to own a really cool company that has helped us in the past with CO2 tanks and refills, and provided free LN2 to test the EDX detector on the scanning electron microscope, offered us a great deal for purchasing it. But transporting -321F liquid to PS:One and storing it presents unique challenges. 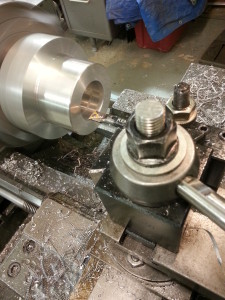 So we need to start with a large storage dewar. These can be ridiculously expensive. I scoured eBay, found one, posted a crowdfunding request to the PS:One mailing list, and, thanks to the generosity of a bunch of donors, I made the purchase.

It arrived and we found ourselves the proud owners of a 43L dewar. As advertised, it had been used. And the prior owner had been, well, uhhh, a cattle rancher. It doesn’t take much imagination to think about what he stored in that dewar. As we anticipate using LN2 as an ingredient for PS:Yum’s molecular gastronomy cooking, our first task was to bleach the inside of the dewar. Thanks to Elizabeth who helped with this. 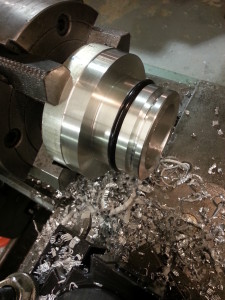 Now that we had no more bull to deal with (*groan*), it was time to tackle the next challenge. Full, the dewar weighs 115 lbs! It certainly can’t be lifted safely to pour LN2 into a smaller dewar, or the SEM EDX detector, or a bowl of ice cream mix. The wrong solution: use a shop vac to create a pressure differential to suck it out. (I’m embarrassed to say we actually did this.) The right solution: fabricate a withdrawal system.

I started with a large, heavy cylinder of aluminum. This was my first real project on the Clausing lathe. Thanks very much to Anna and a number of other authorized members who helped with this. I spent many long hours turning, facing, drilling, boring, and otherwise reducing the vast majority of the aluminum into lots of chips. I cut grooves for a pair of buna O rings, and then test fitted it in the dewar. Not surprisingly, it didn’t fit. As I discovered, predicting the compressibility of rubber O rings is quite difficult. So I had to employ a whole lot of extremely slow trial and error. To make matters worse, each time it didn’t fit, I had to chuck up the aluminum plug into the lathe again, center it as best as possible to reduce runout, shave off a little metal, and take it out to test fit it again. And I needed to go back to my supplier to get smaller diameter O rings. But, finally, I achieved a gas tight seal. 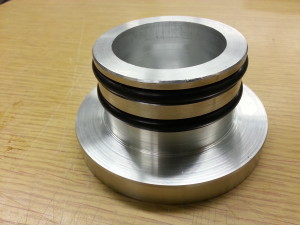 The principle of the withdrawal system is to make the LN2 dewar into the equivalent of a beer keg. LN2 inside a dewar is perpetually in a state of constant, slow boiling, where every mL that boils off expands to nearly 700 mL of gas. This creates pressure. Insert a dip tube to the bottom of the dewar, add a valve, make sure the top is sealed, and you’ve got liquid nitrogen on tap, dispensed by that pressure.

Of course this is also insanely dangerous. Pressure can’t be allowed to build up too much. To keep this safe, we need a second set of plumbing. And here Fitterdave enters the picture. He acquired quite a bit of stainless steel tubing, fittings, valves, and a pressure gauge, designed the system, and fabricated it. A second hole in the top of the plug supplies a second set of tubing that connects: 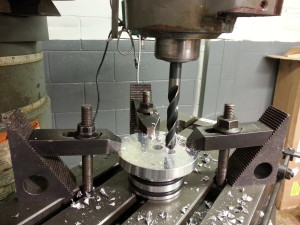 This prevents pressure from exceeding 10 PSI. He constructed the system with Swagelok bulkhead fittings, which use one of the most bizarre thread sizes I’ve seen: 9/16″-20 requiring a 33/64″ drill. This meant I needed to make a trip to McMaster’s will-call counter. Seeing as the aluminum plug barely had room for the fittings, rather than use a drill press, I used the Bridgeport mill to drill precisely spaced holes and to hold the tap square to the workpiece while tapping them. I also used an end mill to make grooves on the underside of the plug flange so we can use a tool to pry the plug off the dewar. 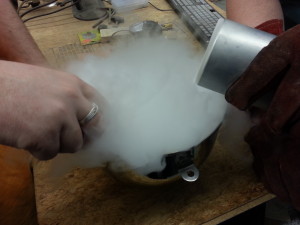 The end result: freely flowing liquid nitrogen! Yes, we did drive nails into wood with frozen bananas and ate frozen marshmallows. With Will’s help, we made an interesting discovery: Irish cream, which normally can’t be frozen due to its high alcohol content, when mixed with LN2 turns into quite tasty and potent 34 proof ice cream. And I was able to run more EDX spectra on the SEM. 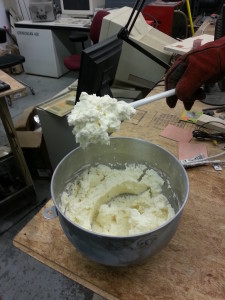 I can honestly claim that this is quite a cool project. -321F cool.