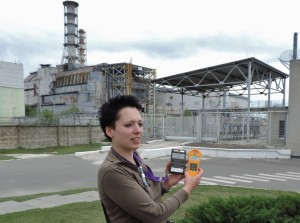 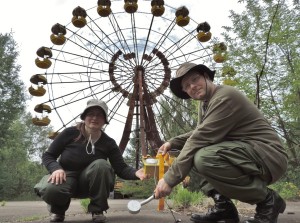 bionerd23 has been a youtuber since 2007, but her science channel only became famous from 2012 on – that’s when she started visiting the radioactive exclusion zone of Chernobyl. Being on semester break in Chicago, this physics student will explain the basics of radiation and the devices that measure it to you – followed by insights into her trip to the Chernobyl zone with Ryan & Elizabeth. The three will give you personal insights on what it’s like to walk the abandoned, radioactive ghost town of Pripyat, including photos, video, and artifacts from the zone. They will give live demonstrations of radiation measuring equipment, including Geiger counters, quartz fiber and TLD dosimeters, NaI(Tl) scintillators, and gamma spectroscopy. They will also examine samples from Chernobyl under PS:One’s scanning electron microscope using secondary electron imaging and energy-dispersive x-ray (EDX) spectroscopy.

bionerd23. Female homo sapiens sapiens (confirmed via PCR). Born in an ancient decade of mullet haired people. Resides around the radioactive wasteland of Chernobyl and frequently posts photon based imagery of her natural habitat on youtube. She recently appeared in the documentary movie “Uranium – Twisting the Dragon’s Tail” (aired on PBS on July 28 & 29 2015).

Ryan Pierce. Male homo sapiens sapiens (assumed but untested via PCR). PS:One member since 2012. Collects and repairs Geiger counters. Maintains PS:One’s SEM. Travelled to the Chernobyl Exclusion Zone in 2013 with someone he had never met, based on the popularity of her youtube channel. Currently serves as PS:One’s Secretary.