On Tuesday 1/20/15, Justin helped me keg the beer. The specific gravity was 1.034 at this point, making for an ABV of 8.4%. We tasted the beer and decided not to add any black cherry extract, since the cherry flavor/smell seemed strong enough. It still has a strong chocolate porter taste. The keg was moved into the fridge. On Saturday 1/24/15, Agocs and Justin went to get more CO2 since we were out, and the beer was finally put on tap. Enjoy! 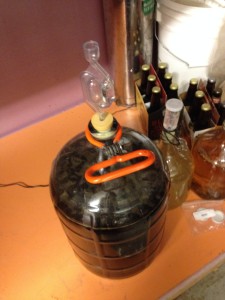 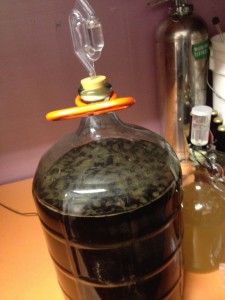 On Tuesday 1/13/15, Ryan helped me rack the beer into a 5 gallon carboy for a second fermentation. We also added the sweet cherry puree, about 16 oz of it. The specific gravity reading was 1.036, and the beer tasted very chocolate-y. 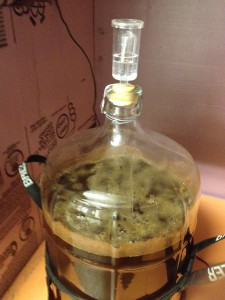 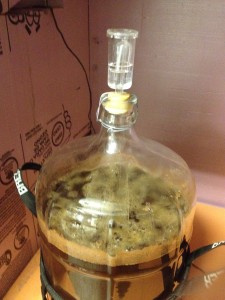 This past Sunday we started a brew for an Imperial Valentine Porter. We just checked on it tonight before the member meeting and it looks like the yeast has started fermenting. 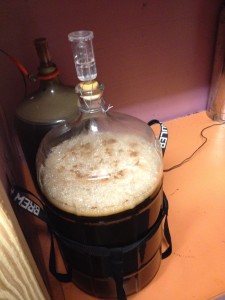 At the beginning of Beer Church on Sunday, we spent a while tasting the delicious beers that everyone brought. Selections included 2 coffee beers, a Superbier, a What the Pho porter, a stout, and a blueberry beer. 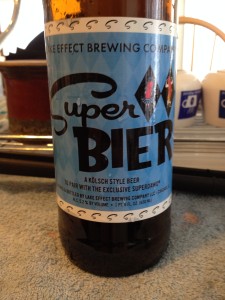 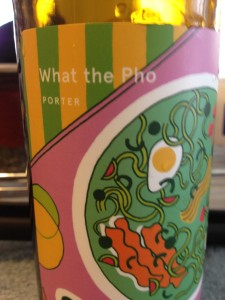 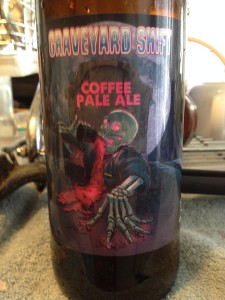 After taking our time to enjoy the beer selection, we headed to Brew & Grow to obtain the ingredients listed on this page:

(Disclaimer: My memory is imperfect and since this was my first time as brewmaster, I will probably get some of these steps wrong due to unfamiliarity. Consult the wiki page for more information.)
After cleaning some equipment and some mishaps with the propane regulator, the first step after getting water to the correct temperature in between 160 and 170 degrees Fahrenheit, was to steep the grains. The grains steeped for half an hour. They smelled burnt afterwards, since they were dark grains. 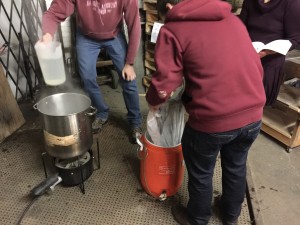 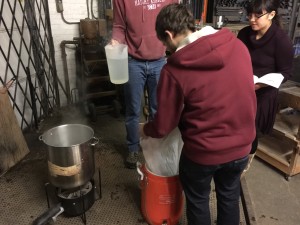 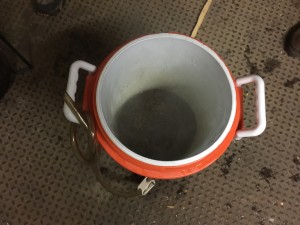 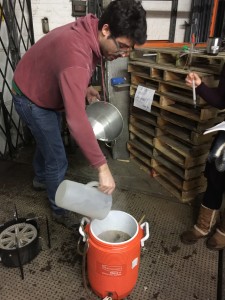 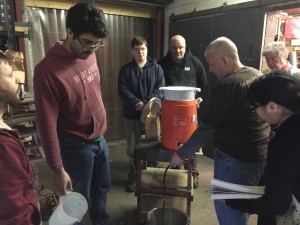 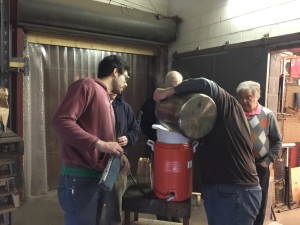 Three gallons of water were added to the mash for the next step, the boil (The goal was to end up with 5 gallons of wort). The wort was brought to a boil and 1 oz of hops was added. All of the malt extract was added as well. There was constant stirring for the duration of the boil, but a boilover still occurred once when we failed to turn down the heat quickly enough. After half an hour, another 1 oz of hops was added. The wort smelled like tea at this point. After another half an hour, we turned off the heat and added the lactose, sugar, cocoa powder, irish moss and yeast nutrient and stirred until they were dissolved. After the cocoa powder was dissolved, the wort turned a chocolate-brown color and smelled deliciously of chocolate. 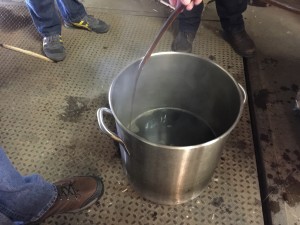 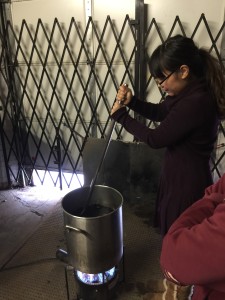 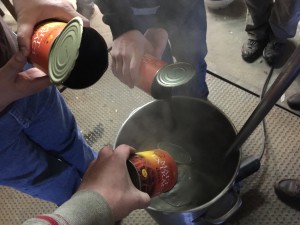 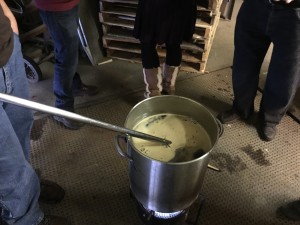 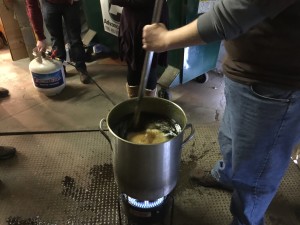 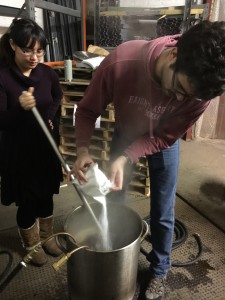 In the meantime, the other equipment we needed was sanitized using StarSan. The copper cooling coil was rinsed and placed into the boiling kettle. After another 15 minutes of rolling boil, the heat was turned off and we started pumping cold water through the cooling coil until the wort reached a temperature of about 75 degrees Fahrenheit. 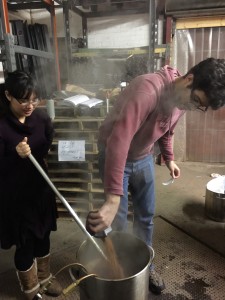 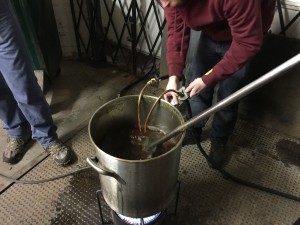 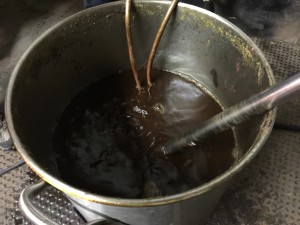 After some more sanitizing, the wort was pumped into a 6-gallon glass carboy. The yeast, after being activated, was poured into the carboy, and a cork with trap attached were inserted into the top of the carboy. The cork was sealed with wire and the carboy was placed into the fermenting area, for a first fermentation of an estimated 7-12 days. Before corking, we did take a sample for the hydrometer and obtained a specific gravity reading of 1.098, very close to the book’s suggested 1.084. The total brew time was about 6 hours (including trip to Brew & Grow). 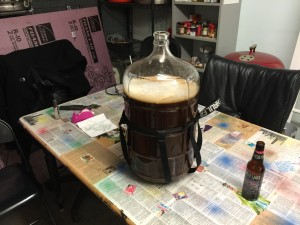 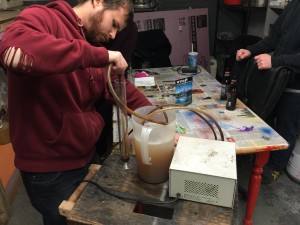 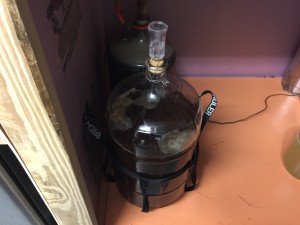 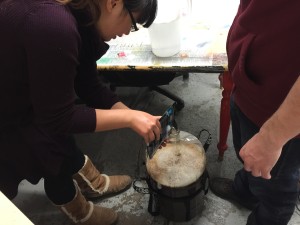 And after cleanup, we all got to taste the brew! 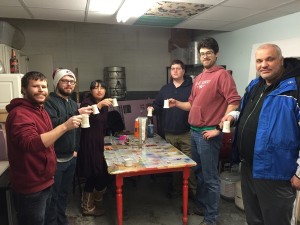 Thanks to everyone for coming! Thanks to Eric and Justin for helping me out so much. Feel free to join us for the second fermentation and the bottling, to be announced.