Former PS:1 president Derek Bever and I were joking in the PS:1 IRC chat room awhile back about using the Shopbot as a tool for uses it was not designed for, and turning it into a plotter seemed especially ridiculous. Since I’d wanted to learn how to use the Clausing lathe, it dawned on me that this ridiculous idea could, in fact, become a terrifying reality. So thanks to Anna Yu who taught me how to use the lathe, I made a bit with an 11mm bore to fit into the 1/2″ collet on the Shoptbot: 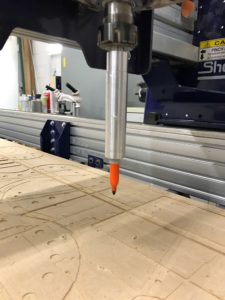 Having spent the time to make the part, it seemed silly to stop there, so I realized I’d have to make a post-processor for VCarve and Aspire (Fusion 360 coming soon!). I already had experience with Shopbot’s post-processors, creating a “Always turn spindle off” version of Ryan’s “Always turn spindle on” post processor as well as the XYZ Zero Finder program that works with the XYZ plate made on the Bridgeport. So hunkering down on the computer in the CNC Lounge (where Aspire is installed), I made a “Sharpie Bit” post processor that 1. always turns the spindle off, and 2. always sets Z to 0, regardless of what is done in Aspire or VCarve. This also means you have to explicitly set Z’s 0 position without use of the Z plate as there’s nothing to tell the machine when the ‘bit’ is at the right spot.

The first attempt was made using some cardboard I found in the garbage. This test did not go well because I had set Z to 0 in one corner of the cardboard, but because the cardboard was folded over, it was more puffy in the middle, which means that the Shopbot happily plunged the sharpie into the cardboard. Oops. Try #2 used a piece of acrylic that was laying around and I assumed was garbage, so I used that and the second attempt went much better. Inspired, I grabbed some acrylic from my shelf and made the version below. 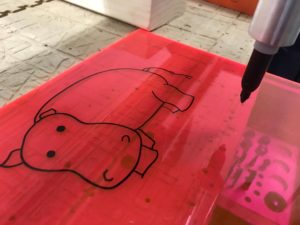 I’m going to clean up the code a little (like removing a bunch of debugging stuff, unnecessary pauses, etc.,) and then will run it by Matt (CNC area host) and if he’s cool with it, the bit will go in the drawer and the post processor available to anyone using VCarve and Aspire. 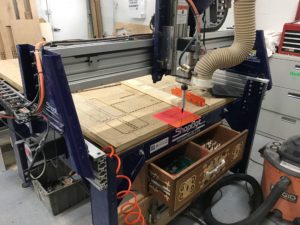