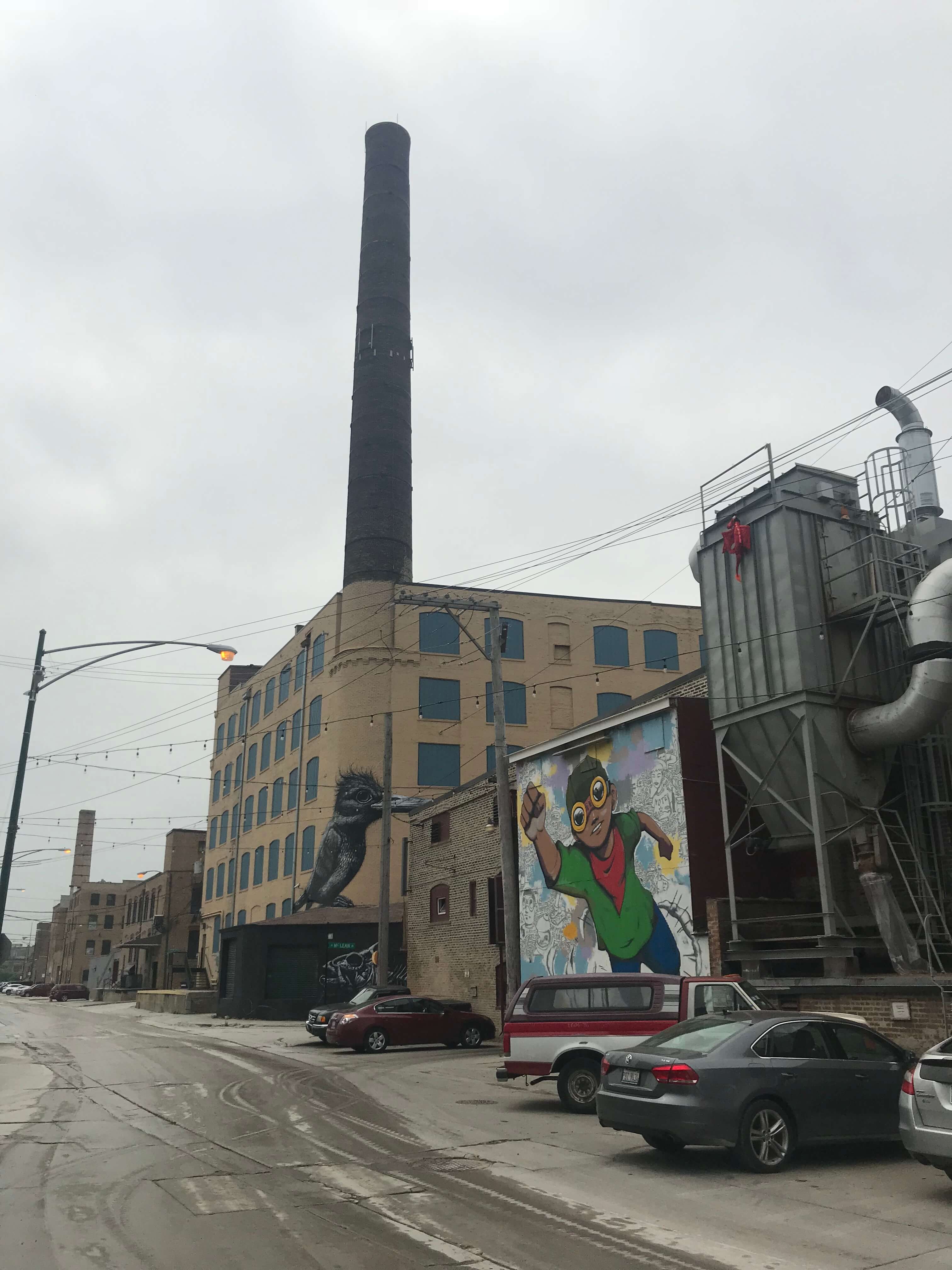 A group of intrepid PS1 members took a tour of the Horween leather factory last month. Horween used to be one of many leather manufacturers clustered on the north branch of the Chicago River. It is the only one still remaining.

Horween has been able to keep its manufacturing plant located in Chicago by going upscale. Today, the company is primarily a provider of high-end shoe leather.

Oh, and they also make all the footballs. I will get back to this in a bit.

Below find some photos from the tour. One important note before the slideshow begins: we got hit with a ton of fascinating information on this tour, and I remember about 5% of it. I will pass along whatever tidbits I can, plus maybe a few things I made up. You’ve been warned! Click any picture for a larger version.

Horween has been on its present site for going on a century now, and the building is about as confusingly laid out as you might expect. Think Willy Wonka factory, except it smells disconcertingly like beef.

Also, given how nondescript the buildings facing Elston are, the alley sports a fair number of kick-ass murals: 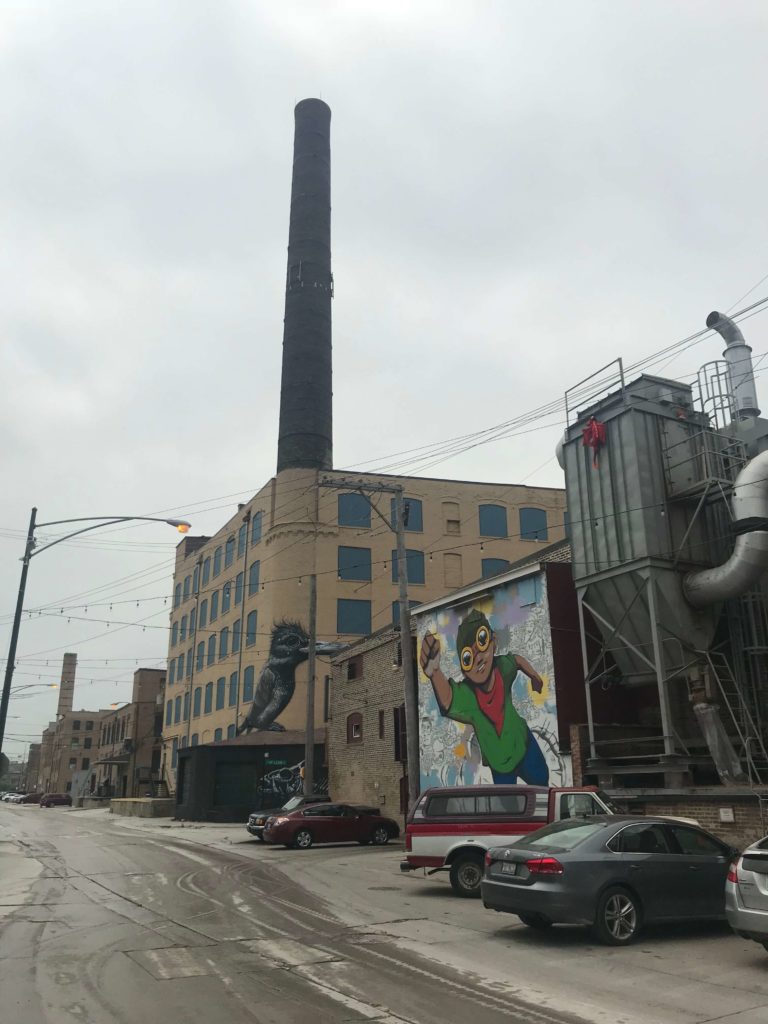 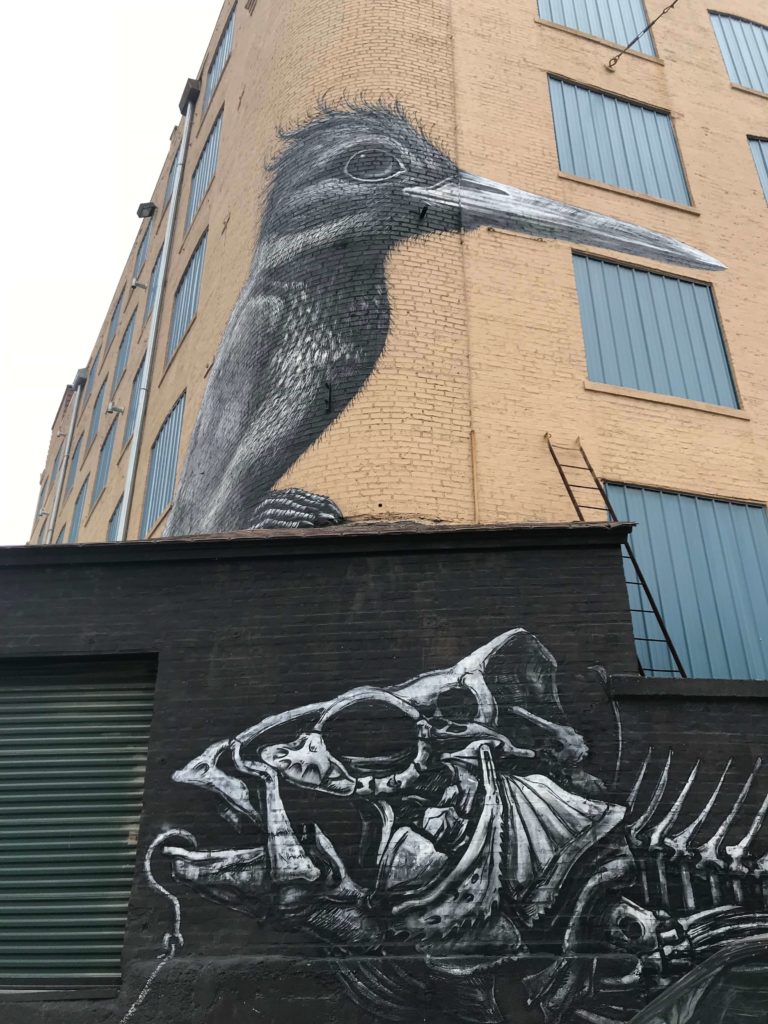 Horween processes both horse hides and steer hides. I expected some strong scents in the factory, but I was mostly prepared for chemical smells. This room smells distinctly like meat. I believe the hides at this point are “pickled,” meaning packed in salt for preservation. They need to be shaved and soaked before the tanning process begins. 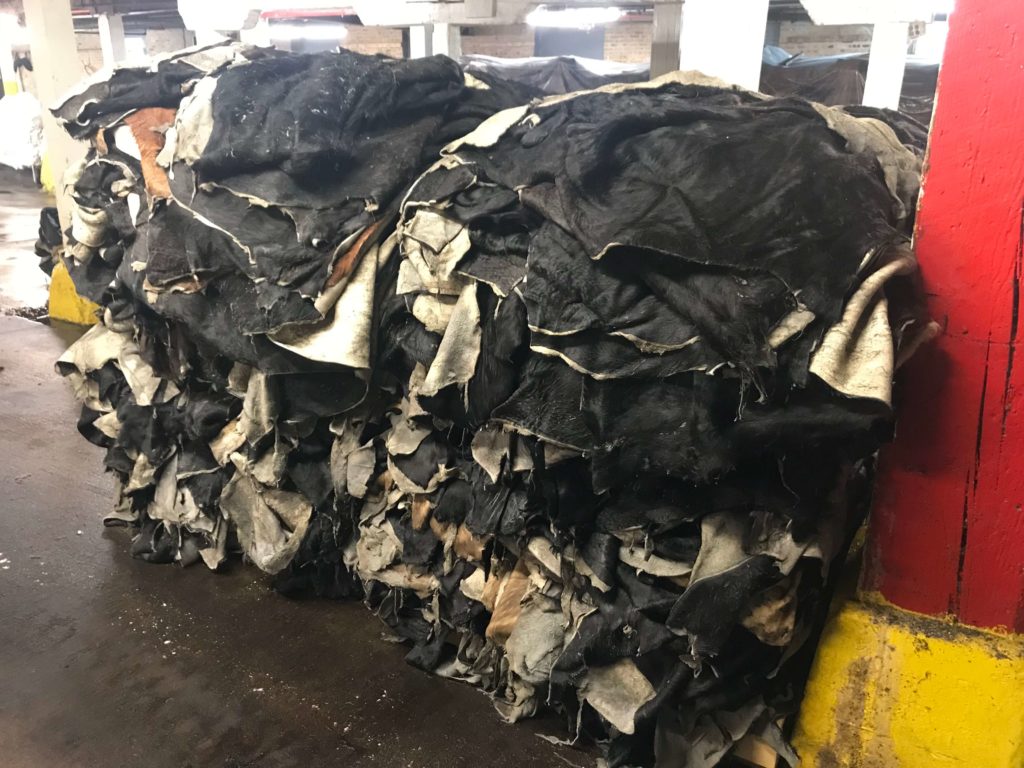 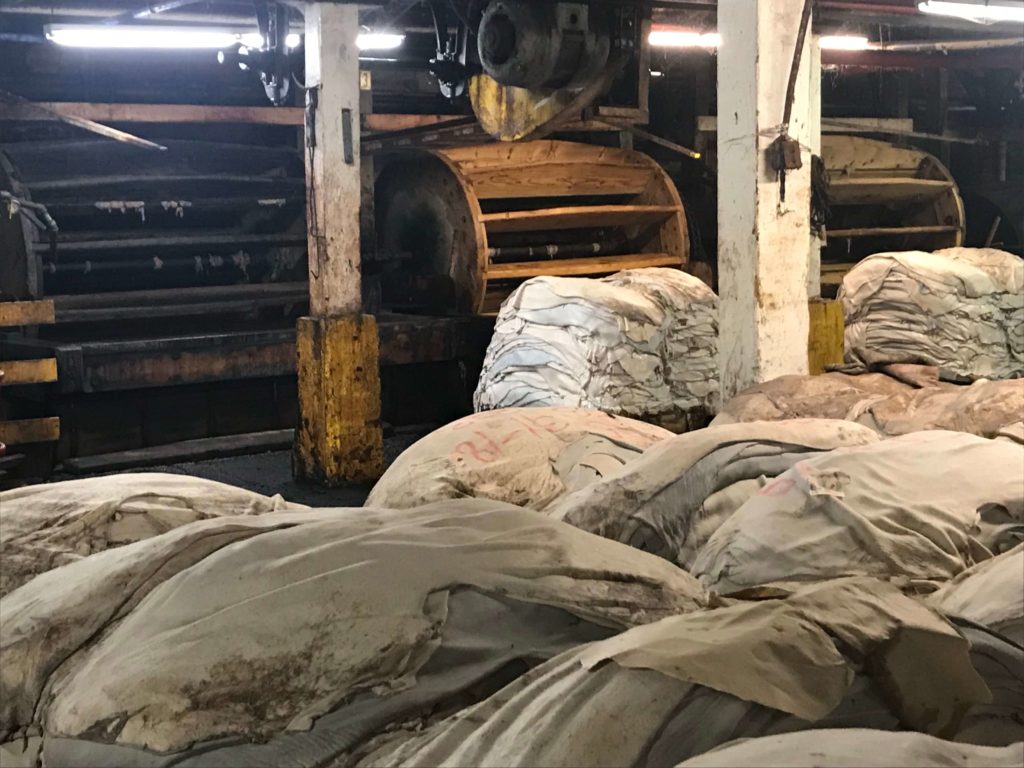 Some real talk: horse butts are awesome. Or so I’ve come to understand. Leather from horse butts apparently has a very specific thickness and grain and set of calluses that make it an especially good material for extremely fancy shoes. Horween doesn’t traffic in horse hides so much as in horse butts. And butt liquor: 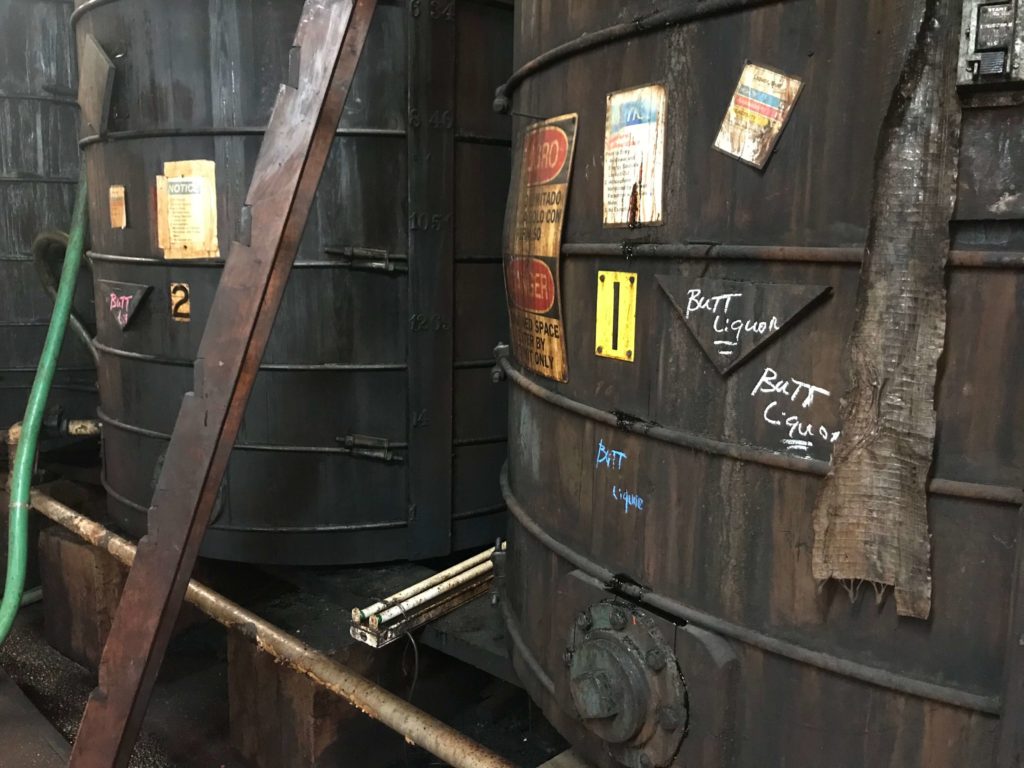 The process of turning hides into leather is essentially one of stripping out the natural fats and replacing them with ones that will remain stable over time. And of course adding color and finish to the product.

There are two types of tanning processes used at Horween: chrome tanning and vegetable tanning. Vegetable tanning involves soaking the hides for months in vats of liquid infused with various tree barks. These vats looks  shallow, but don’t be fooled! They are about seven feet deep: 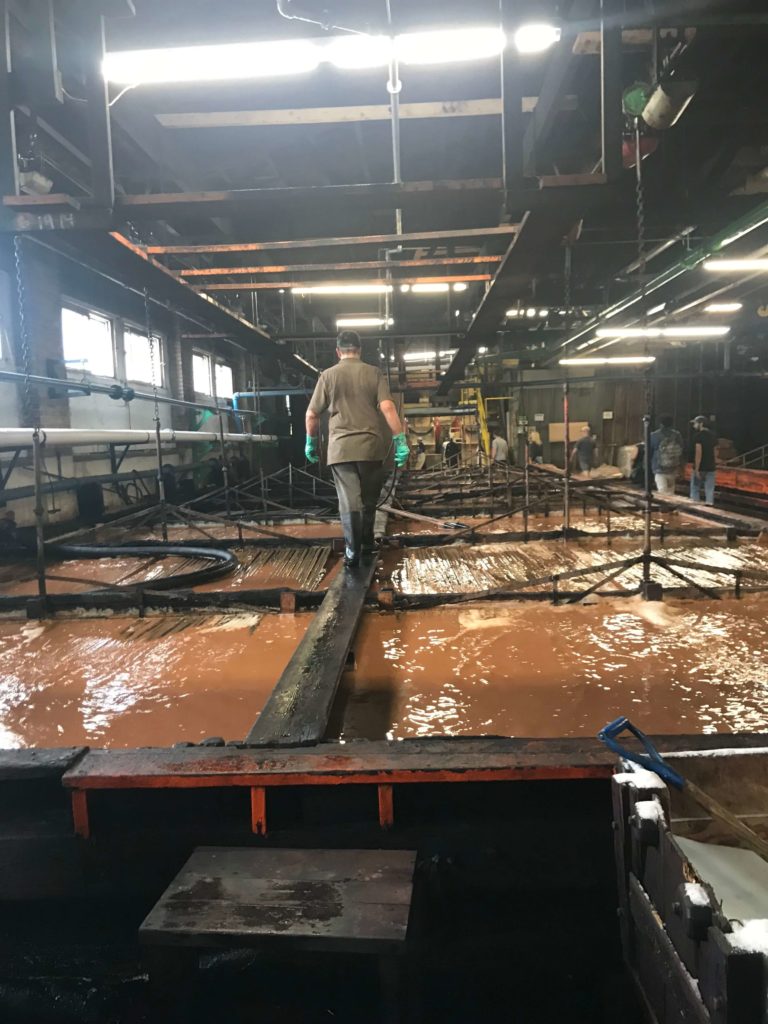 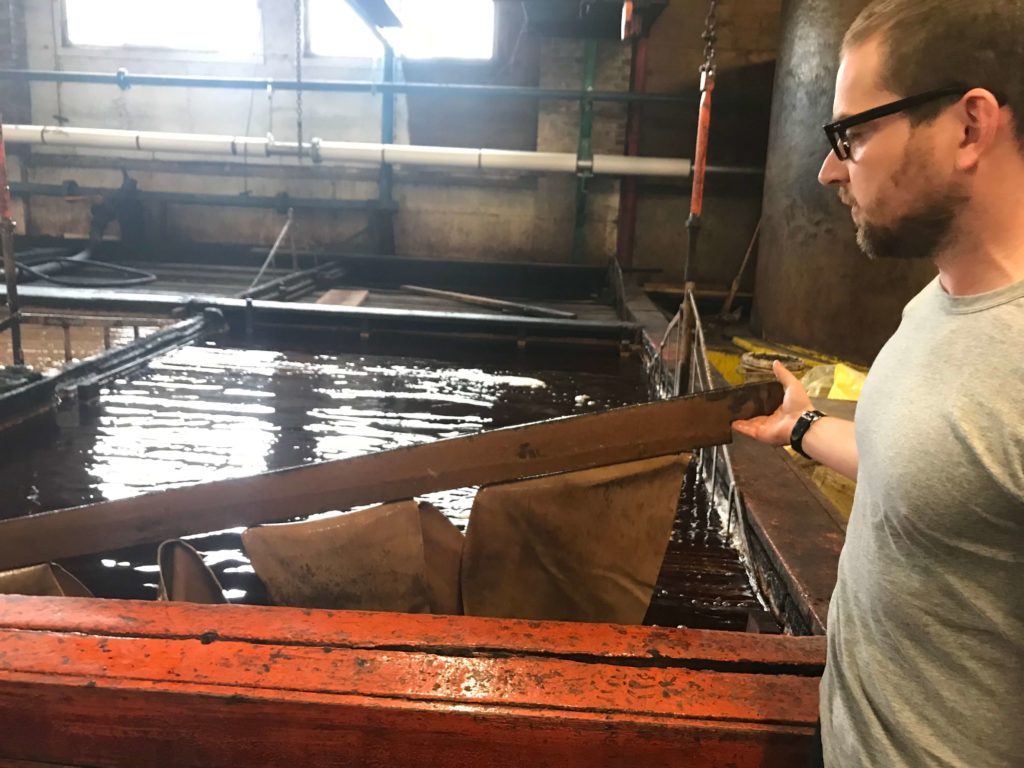 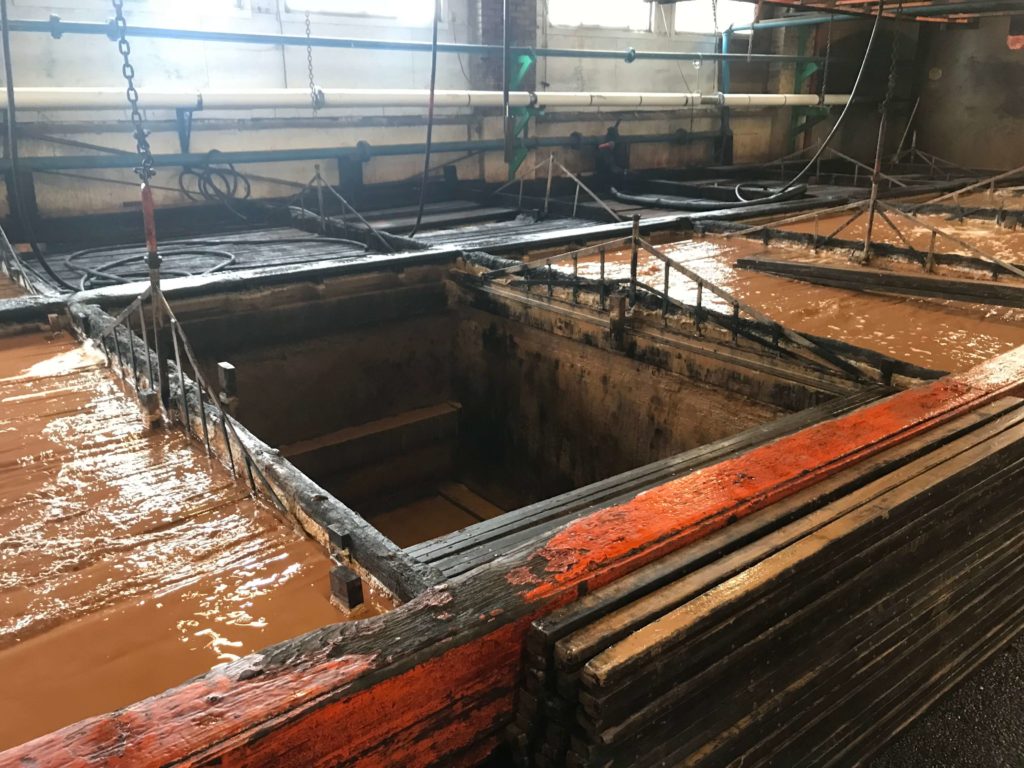 That guy in the glasses is Nick Horween, by the way, our extremely gracious tour guide and nth-generation leather maker. His great-something-grandfather came over from the Ukraine after completing military service at the age of, like, fifteen and deciding that being a Jew in the Ukrainian army in the 18th century was maybe not such a hot career path. (TIL: there actually were Jewish Cossacks. I’m not saying Nick Horween’s ancestors were Cossacks. I’m just saying I learned this after spending some time on Wikipedia today.)

Great-something-grandpa Horween had been trained as an Old World leather tanner, and he continued plying the trade here in Chicago. Chicago was a good place for leather making, on account of the nearby stockyards.

The chrome tanning process involves chemicals and is not especially Instagram-worthy. 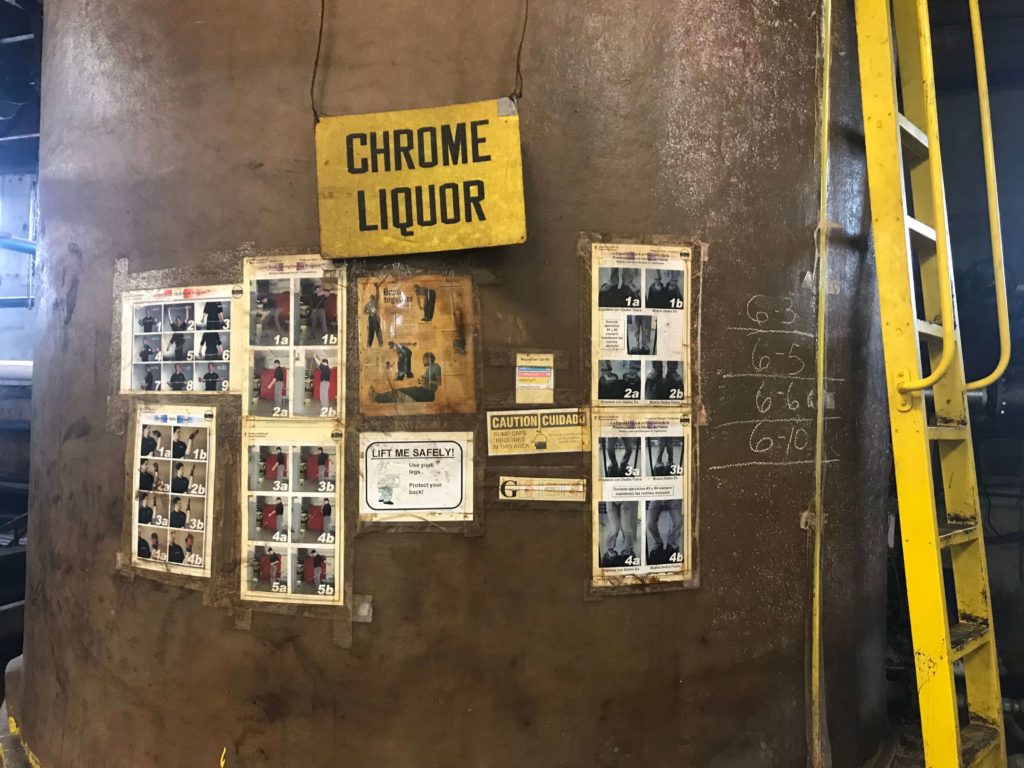 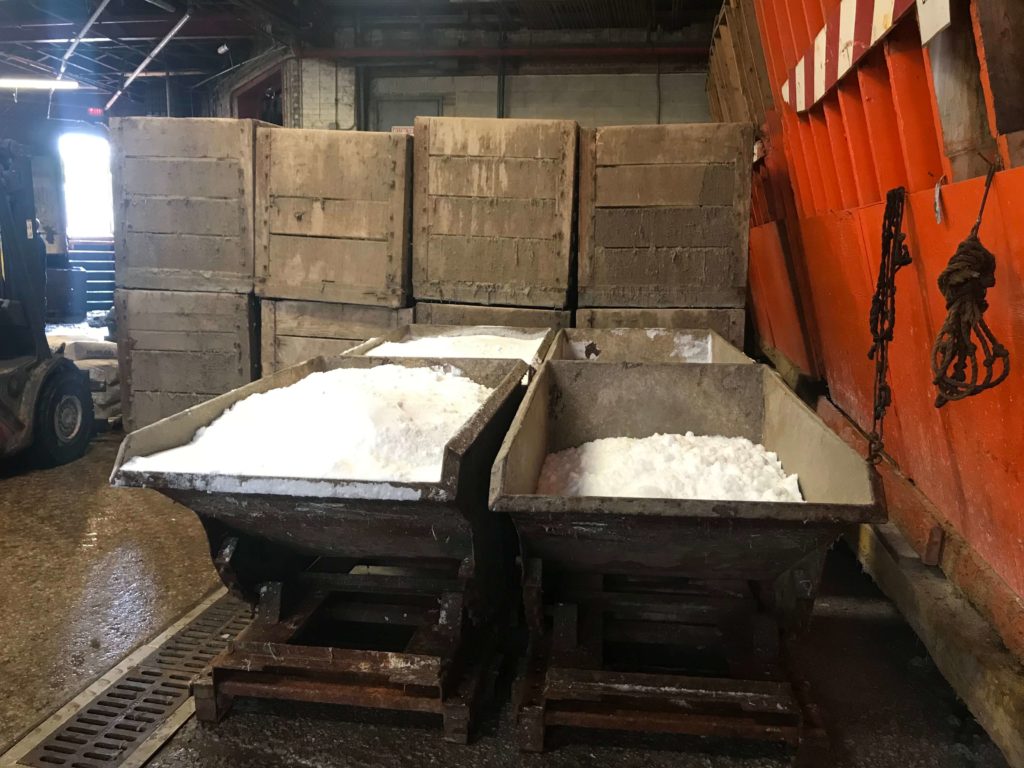 At the end of the tanning process, the hides still aren’t leather. In fact, the chrome-tanned hides are distinctly blue (referred to as wet blue). Below is a horse butt. You can see the grain: 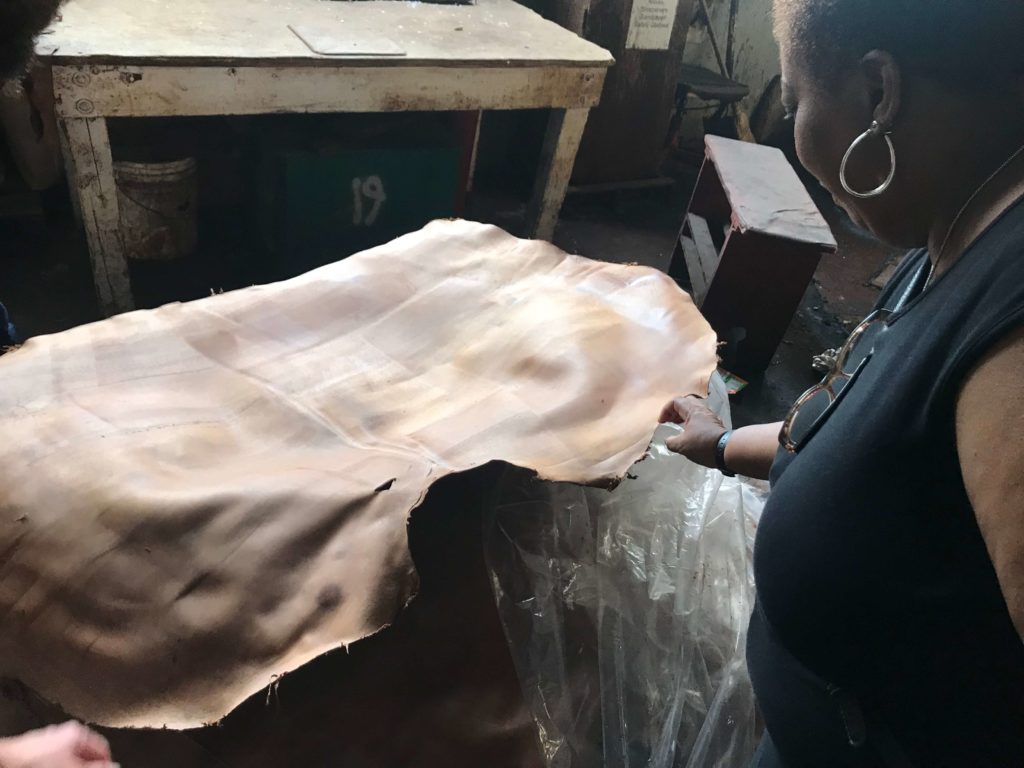 And here is a stack of wet blue hides: 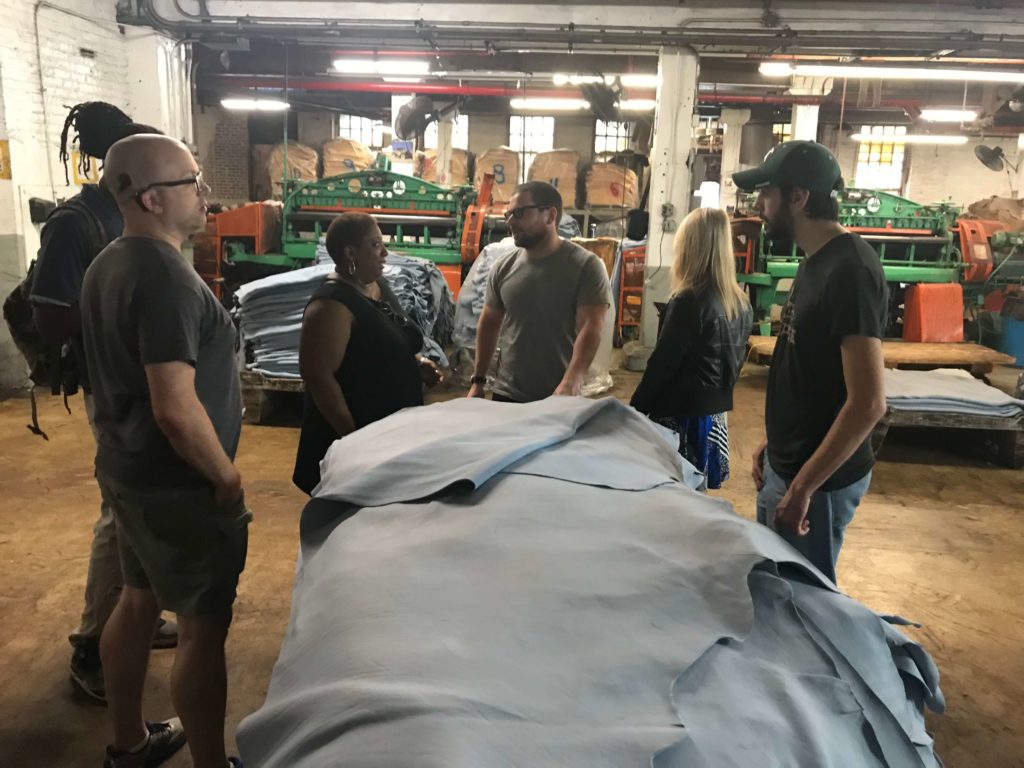 Leather is an organic product (duh), which means it doesn’t come in uniform thickness. This is a problem if you’re selling to shoemakers who want to sell a uniform product, so the next step is to feed the leather through a sort of horizontal bandsaw that shaves the leather to a consistent width.

Maybe you’re wondering, like me, how often you need to sharpen a saw blade that is used to shave tanned horse hides. And the answer is: always. There is a sharpener built into the machine that is constantly honing the blade as it passes through the hide.

Horween has versions of this machine that have been in operation for about 100 years. They just keep replacing the parts. In general, there is a lot of DIY going on at Horween. They have two carpenters on staff. 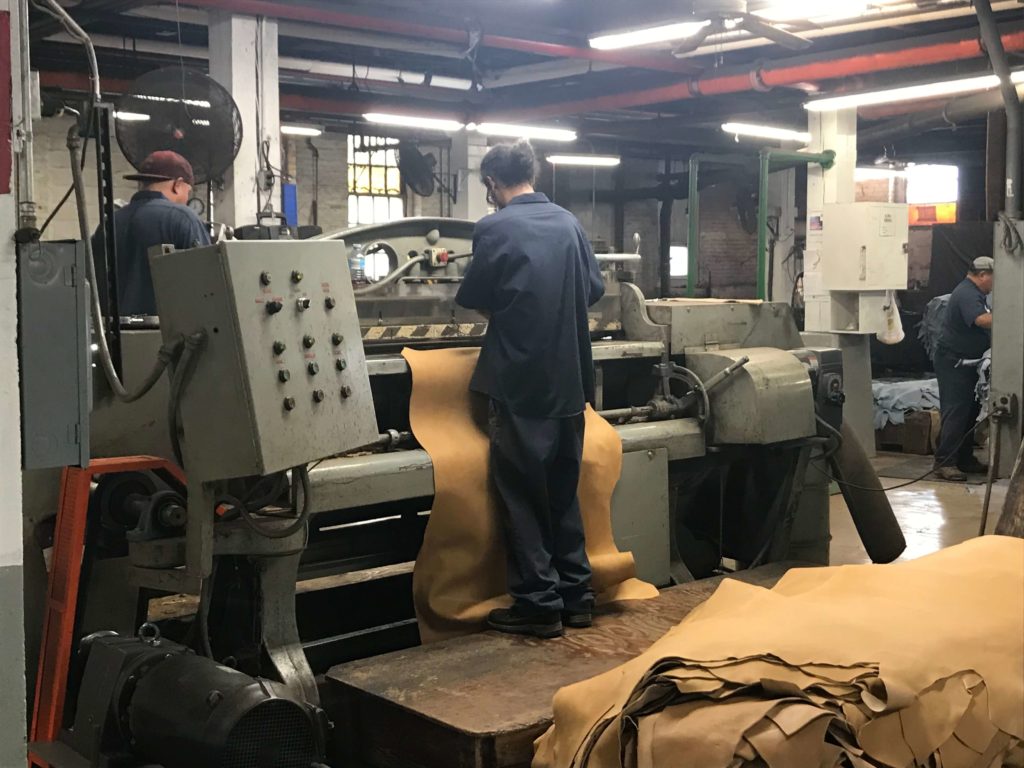 This is where they dye the leather, which is also the only part of the tour where Nick was cagey about me taking photographs. The chalkboards on the dye vats show a color recipe. Purchasers work with Horween to achieve a specific look. 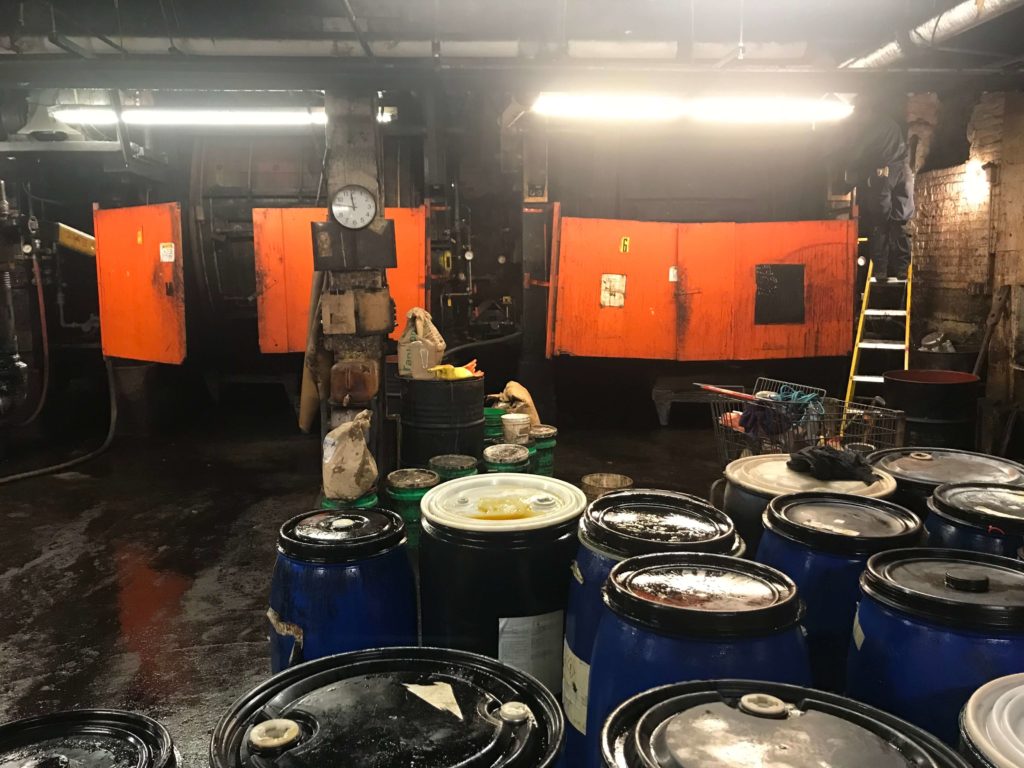 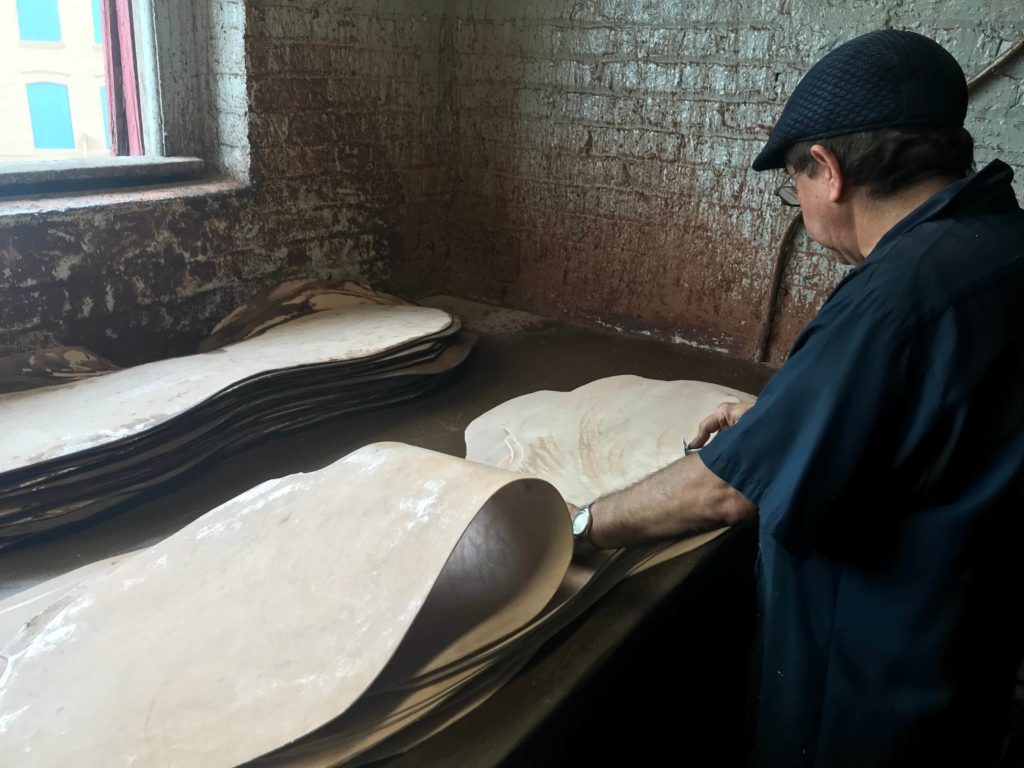 Oh, yeah, about the footballs. Horween makes them. All of them. As in, all the ones made out of leather that are officially used by the NFL and presumably by other teams that care about using real footballs. The balls are not made out of cows, not pigs.

The pattern on football leather is embossed by a very heavy press: 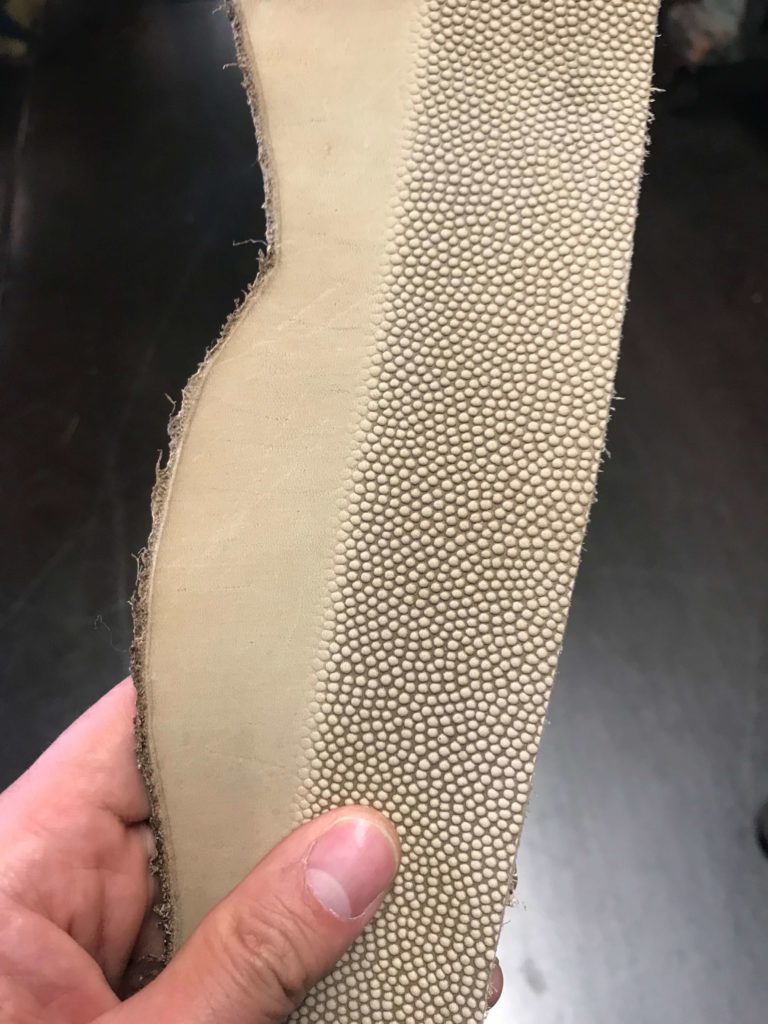 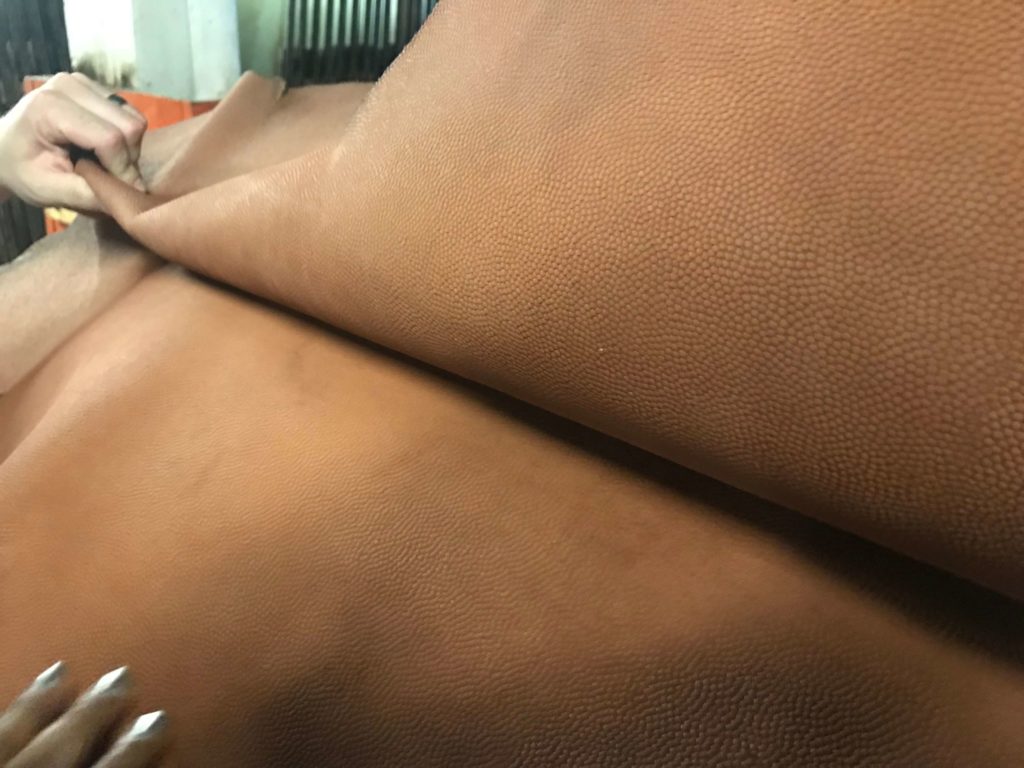 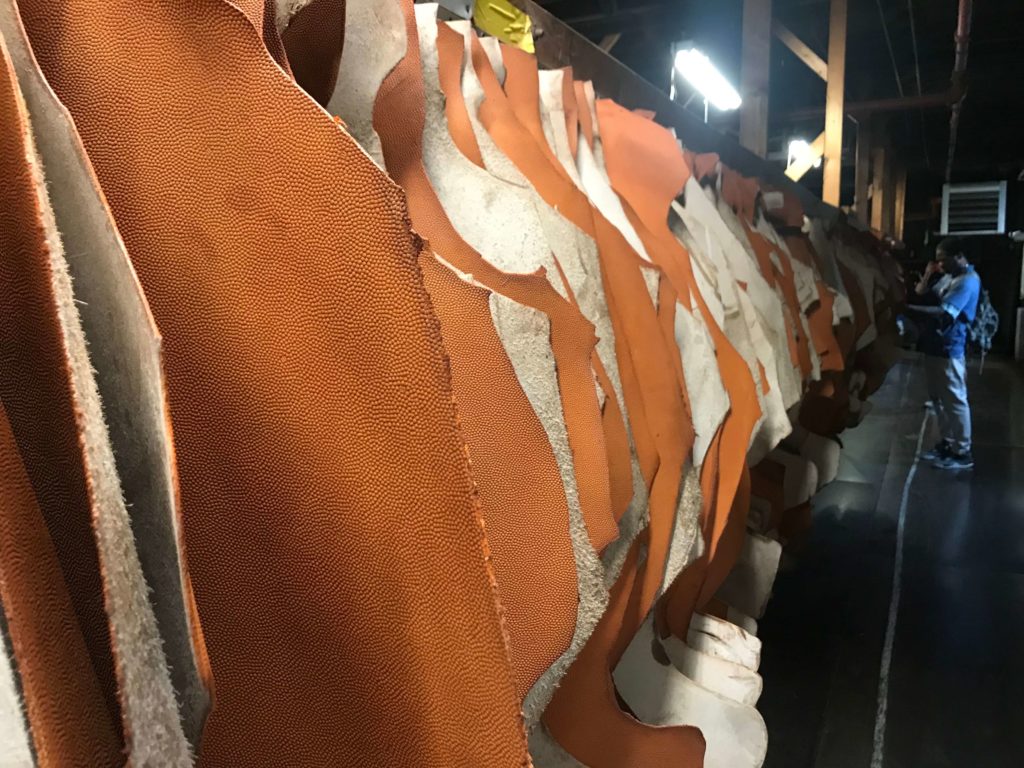 Towards the end of the process, the leather is sliced down for thickness yet again. This room actually smells delightful. It smells like Ricardo Montalban sounds. 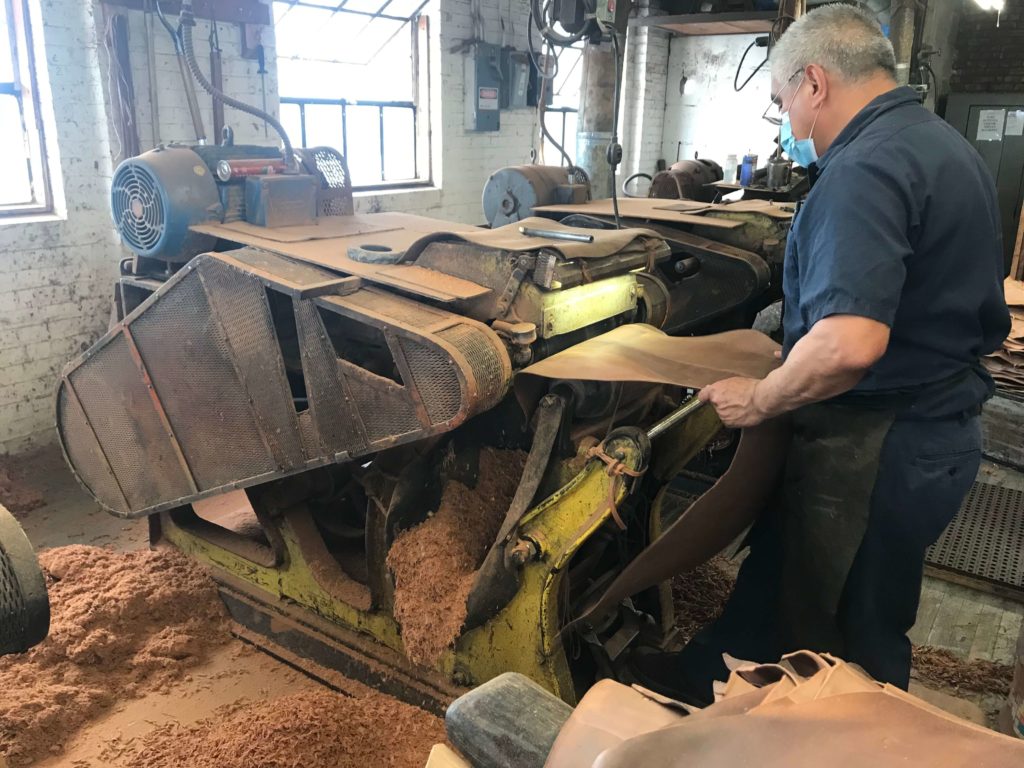 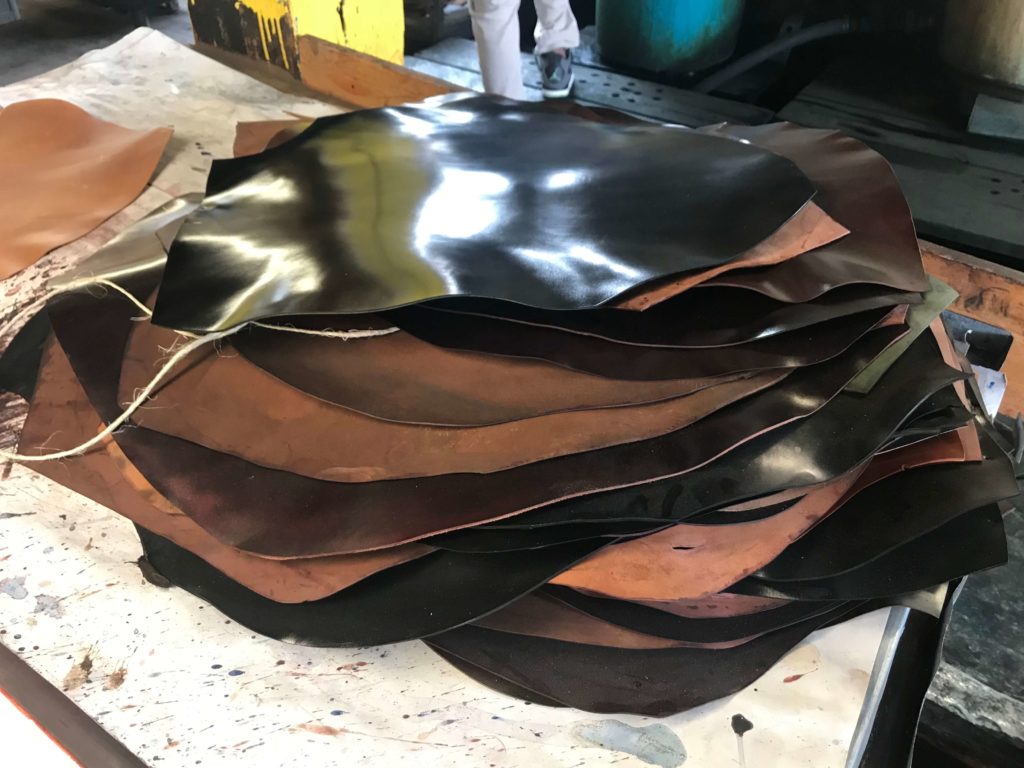 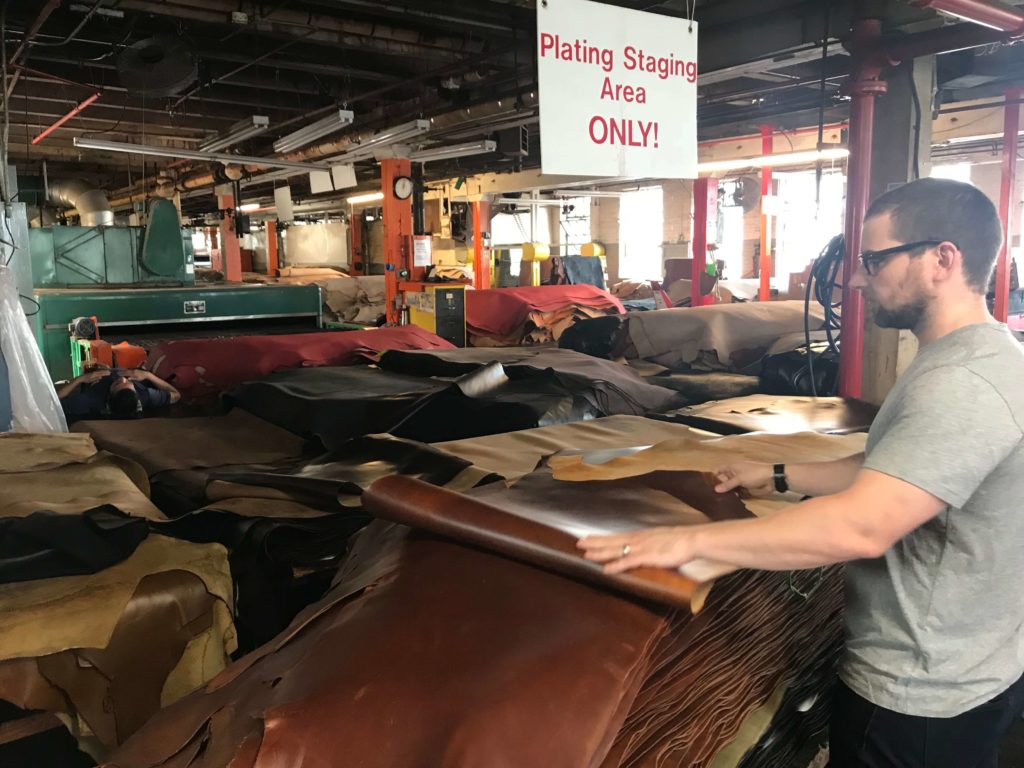 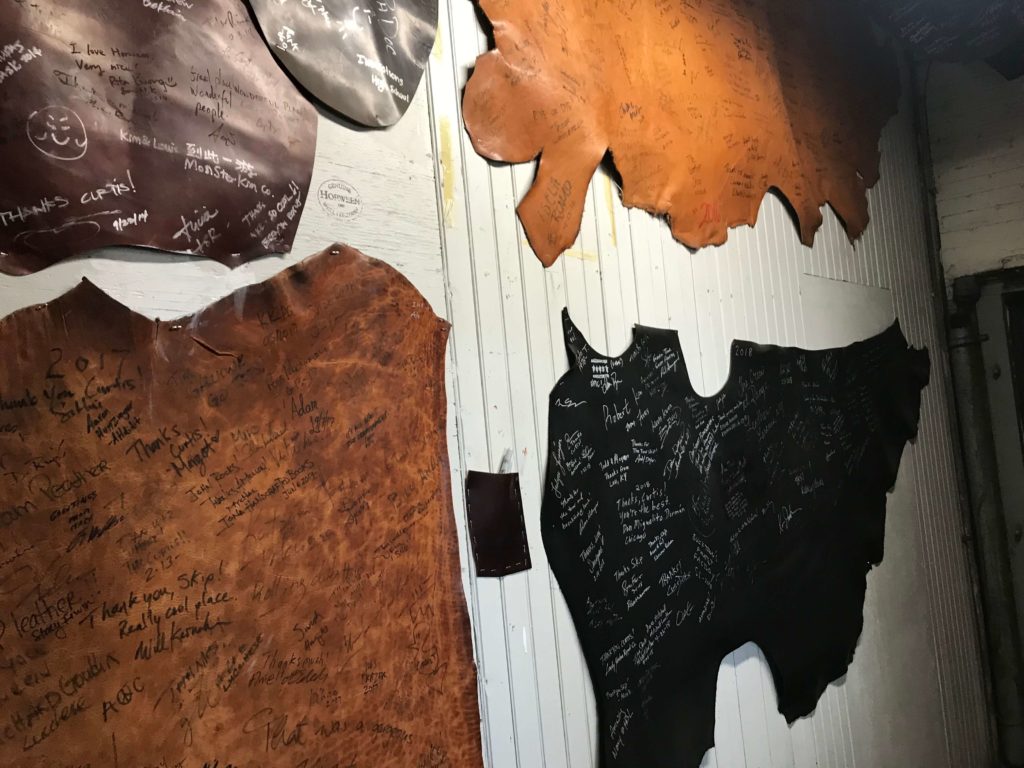 A huge thank you to Nick Horween for allowing us to tour his factory. Below are some fun historical footnotes to end the tour. Go Pats! Also, read the framed letters. They are awesome (remember, click to embiggen). 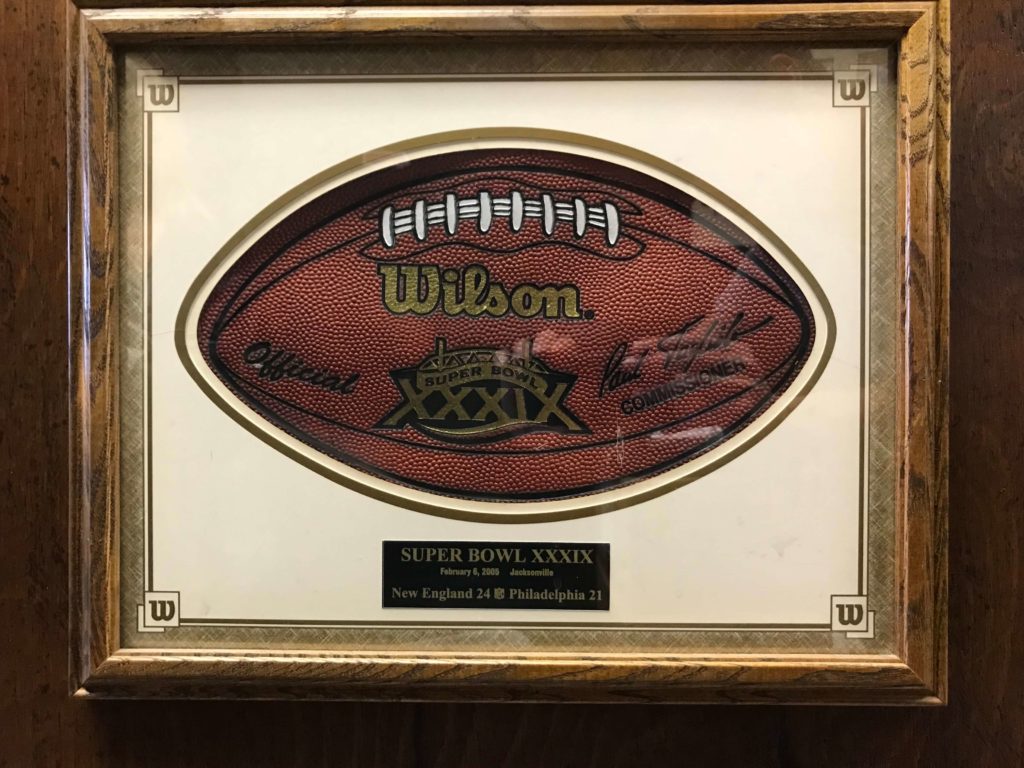 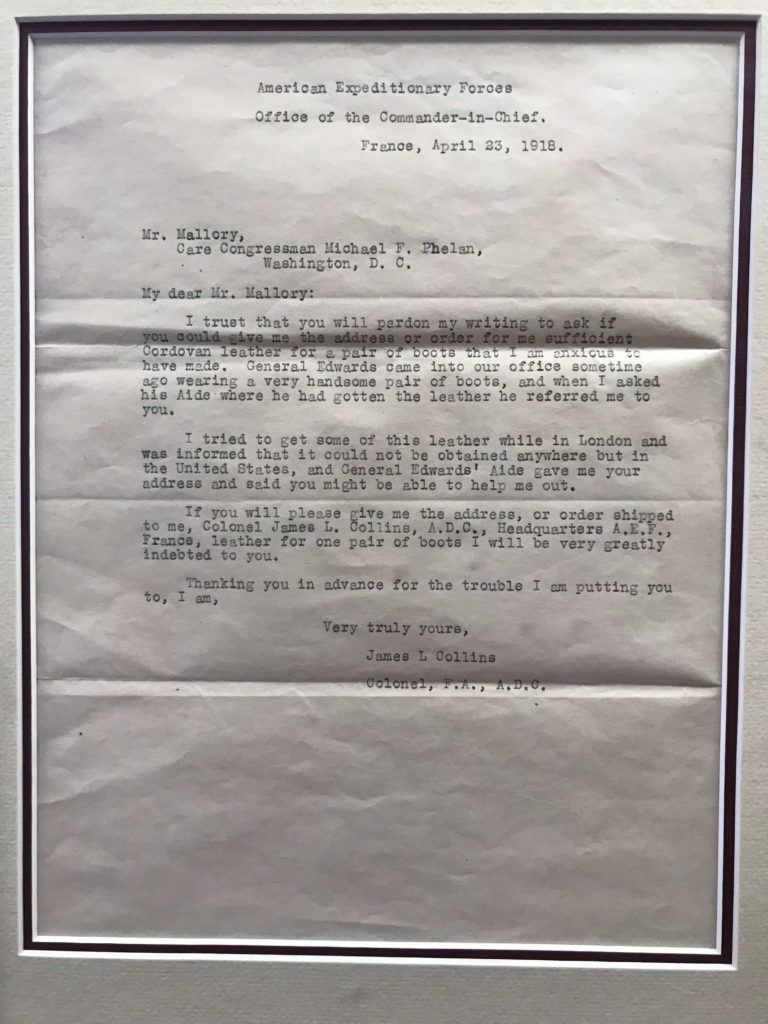 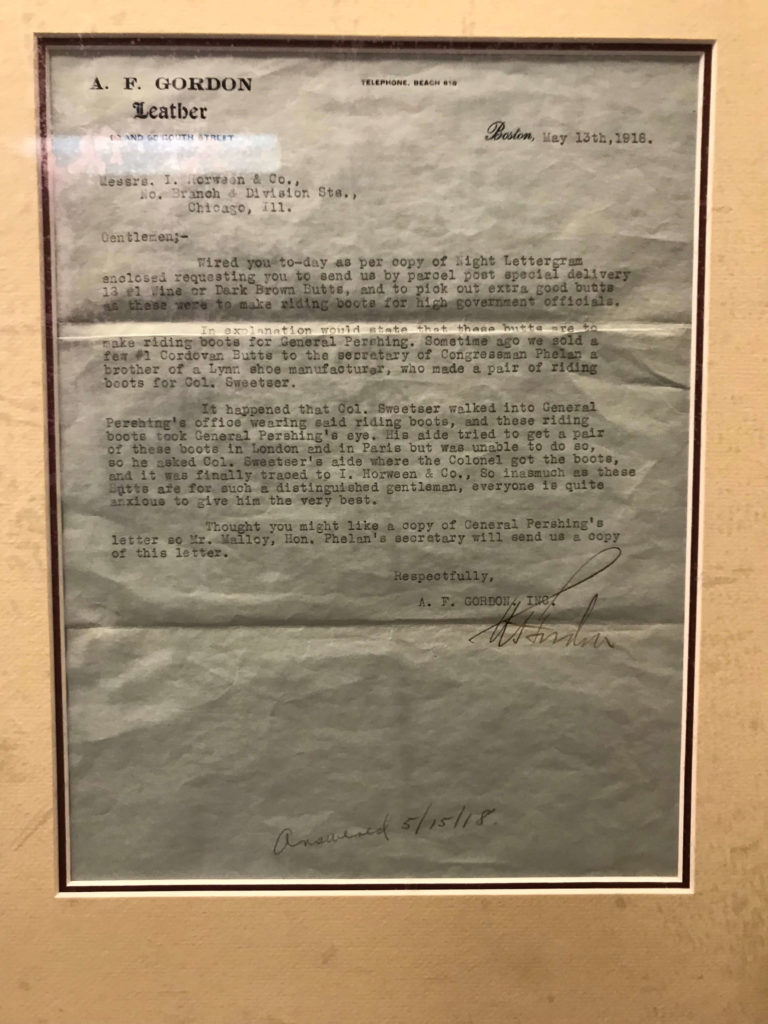