Cat’s Out of the Bag 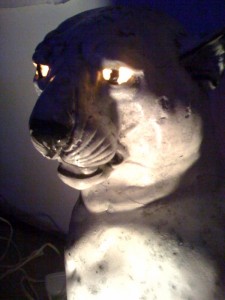 Q: What has 4 legs, glowing eyes, and guards our hackerspace?

A: Our newest addition to the ever evolving workshop, Carl!  If you want to know what’s going on at PS:One this very moment, this is the cat to go through.  You can reach him by following him on his twitter stream here: http://twitter.com/carrrl.  Work is ongoing to further automate his updates including a motion detector that we’ve already acquired.

1.
In Nepal at the turn of the century, in a valley between Kathmandu and
Mount Everest lies one of Mother Nature’s most beautiful creations.
The Sherpas called him Mik a Mê, loosely translated, “Fire
Eyes.”  According to the lore of nearby villagers, Mik a Mê is
responsible for the some of the greatest events in their little known
history.

Its believed that if you were to look into his eyes you
could be flooded with inspiration and resolve.  While many skeptics
readily dismiss this as hearsay, there are historical connections of
these sightings occurring in concert with a prosperous harvest after
many years of famine.  Mik a Mê became a legend, one that was prayed
to.

The people soon became dependent and lost the will to do
anything for their own benefit.  Days of back-breaking labor turned
into endless worship of a spectre.  Requests became superficial.
Society, comfortable on its laurels found new demands to make.  Instead
of appealing to Mik a Mê’s humanity, they asked him for riches and
envy.  Mik a Mê, furious with the people’s lapse of humility left them
to survive or perish on their own.

Having wandered the globe
with no promising refuge for years, Mik a Mê could travel no more.  He
found a remote patch of land to inhabit and came to rest.  Nobody heard
from him again until a little hacker conference came to town.

That
year, being the 25th iteration of this particular computer club
meeting, celebration was abound.  A group of “performance artists”
known for writing a biography of a made-up person were present to use
the sword, not the pen, in asserting their fledgling country’s right to
exist.  People were walking around with videocameras at arms length,
recording themselves.  The world had seemingly turned itself
upside-down.

One hacker, so juiced up on Club-Mate, decided to
builder his way across the entire city.  Never before was it known that
nerds were capable of such feats.  Regardless, the man kept going for
no good reason, navigating the most efficient path through villages and
on through the countryside.

He stumbled upon the very place were
Mik a Mê was last seen, spelunked into a nearby cave, and tripped over
an unnoticed rock. With his face still firmly planted to the cave
floor, he turned one side of his head to find those two glowing eyes
staring right at him.  With an air of misguided confidence, the man
smiled and said, 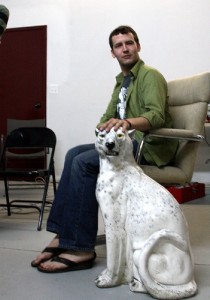 Carl was rescued from the jaws of the the nearest landfill by poaching
him from a nearby alley.  That doesn’t mean he won’t claw your appendix
out if you look at him the wrong way though.