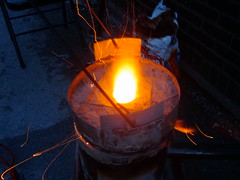 Years ago, I found this website describing the author’s discovery melting aluminum by throwing a soda can in a campfire. He went on to describe the tools he used later on to melt the metal to produce model rocket nozzles. The tools were primitive, but still surprisingly effective. Ever since I read that page I’ve wanted to do it myself, but living in Chicago apartments, I didn’t have much opportunity to build a furnace and run it.  Since I’ve joined Pumping Station: One I finally have the opportunity I need to build an aluminum foundry and begin casting metal parts and art pieces.

I read about the topic a bit more online and decided to build Lionel Oliver’s Flowerpot Foundry. It was a pretty simple design that I thought I could make pretty cheaply (so if it didn’t work it wasn’t much of a waste). After two weekends constructing the furnace and a few attempted melts and some advice from some Navy nuclear technicians, it worked like a charm.

The basic construction of the foundry is a metal popcorn bucket with a flowerpot surrounded by concrete in it. The heat is generated from ordinary charcoal burning in the flowerpot. Ventilation holes at on top of the lid and at the bottom of the flowerpot help the fire to burn hotter & faster while letting smoke escape. I won’t go in to too much detail on the construction since Lionel is trying to sell a book on the topic, but my photographs of the process are on my flickr.

It was very exciting to see soda can after soda can go into the crucible and turn into a pool of shiny metal, then pour it in a muffin tin and get a solid ingot of aluminum. It felt like quite an achievement to turn such simple things into a furnace capable of getting that hot! But this is just the beginning. We’ve melted the metal successfully; now we have to make something useful from it. Lost foam seems to be the easiest process to get started with, so that’s what I’ll be pursuing next.