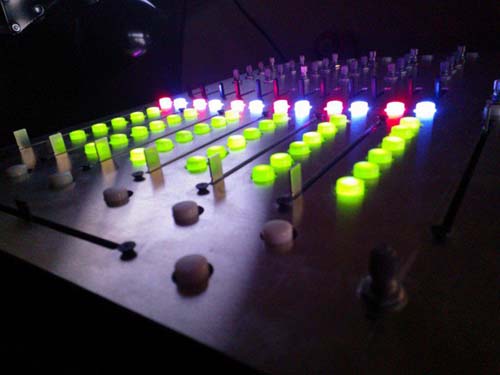 Greeting everyone! I’m glad to be a part of the bloggers here at PS: One and even more excited to share the project that took me the past four months to complete. The Apollo 13.

But it’s actual name is the Maven. Because DJ Sasha happens to be the only one in the world who owns one – until you know, today.

Sasha is just one of those DJ’s that stands out to me, he’s not just putting two songs together, he’s putting on a real performance and he’s doing it with Ableton Live and the Maven. A one off piece of hardware so unique that if you know what Ableton is you drool just looking at this thing. It’s a fantastic looking device and I wish I could see the thing in person! Alas, I went entirely off of photos and four months ago began the project to replicate the device.

It’s worth making very clear at the start of this post – I had absolutely no idea what I was doing when I started this. Sure some electrical engineering courses in college, but there was no ounce of me that felt prepared whatsoever to actually undertake this. But after much thought, it occurred to me I wasn’t thinking about this device as separate pieces rather I was just looking at an assembled puzzle. It then quickly started coming together for me, “Hrm, there are 8 long faders, there are 12 short ones, there are a bunch of knobs, and a lot of buttons that light up.” Which then turned into “There are 8 long faders, which a picture of Sasha adjusting the volume…what’s the length of my hand? What’s the length of my hand compared to a Pioneer mixer?” Etc etc.

If you look at this Maven on (http://manalogue.com/2010/12/07/digital-djing/) you can see how brilliantly this thing is laid out. Looking at any one of the 6 channels we can see (starting from the bottom) A/B crossfader selection, then a volume slider accompanied by 6 LED pushbuttons each designated itself to the first 6 clips of audio within the Ableton Live software. Already, this thing is off to a great start you can launch clips in real time in a physical location that makes the most sense I’ve ever seen on a controller – right NEXT TO THE VOLUME. Now moving up there are two LED pushbuttons designated as Record and Cue for each channel. Above those are two FX Send sliders (A/B knobs for FX Send in Ableton). Then above that 4 stage EQ – lo, mid, hi, and gain (I’m assuming it’s gain, but it’s a MIDI controller. He could just as easily assign these knobs to anything he wants in Ableton (such as effects) – but he’s gone for a pseudo-traditional mixer interface so it’s a fair estimate. Finally, a single LED pushbutton for Channel On/Off at the very top.

Now to the right of these six channels is some added genius (again bottom to top). Dedicated knob for headphone volume, and a master/monitor selection. Above this is the standard master volume but incredibly overlooked on most controllers master BPM. Go ahead and let this thought just detonate in your brain for a second. A dedicated slider assigned to BPM within Ableton Live. I can only assume Sasha must have 5 bodyguards protecting this fader during sets. Either that or he sets the range of the slider from 125-130 BPM or he pulls an Apollo 13 and writes “No” on some tape. I digress. Above these two faders are 8 (what I assume to be) random effects knobs each with their own respective on/off function. Finally on the very top of this is master Play, Stop, and Record.

The Maven is just all sorts of crazy amazing well engineered.

Now I made my announcement around 7:30pm last night (7.11) on my personal blog which you can view the entire original article at (http://adamdzak.blogspot.com/2012/07/introducingapollo-13.html) and since then it’s been nothing short of one amazing day. Because when I woke up this morning at 6am and discovered this… 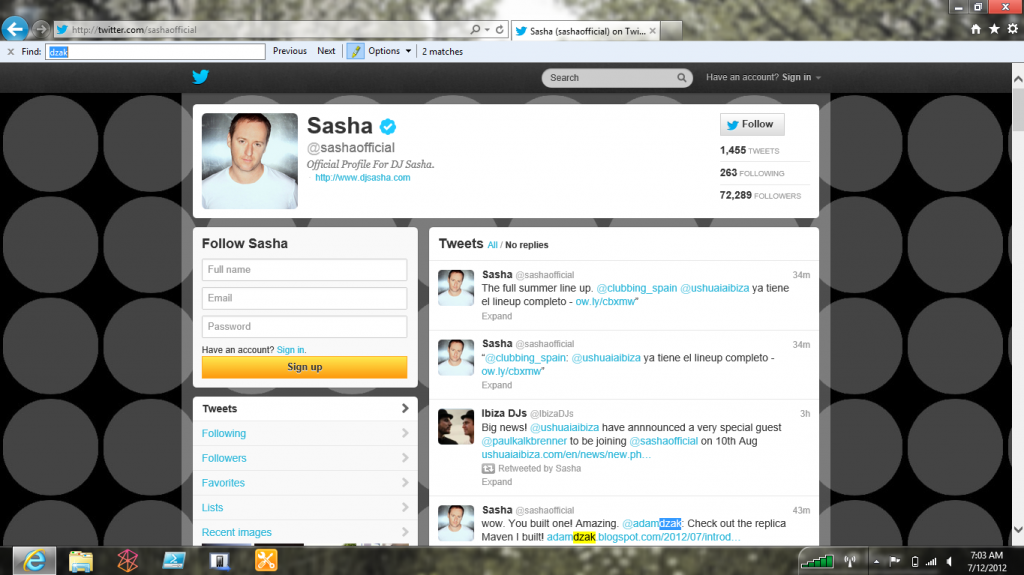 The goal as of now apart from finishing this very post, is to organize everything I’ve done towards this project into very detailed blog posts explaining the entire 4 month process. It’s all been thoroughly documented and I have a lot of pictures and video from day one. I look forward to sharing more!

A thanks goes out to PS: One, the exec board, and all the members who make this place up. Many of you offered some fantastic opinions and guidance on this project and I’m insanely grateful for all of your contributions big and small. Additionally, Colin a member of PS: One who I owe this entire video too – shot and edited the video! I suggested the music and offered some direction, but all credit is due to him. Thanks again man.