A couple of NERPs ago Russ Porte gave a 15 minute intro to the Freedom Board, an inexpensive single board computer. 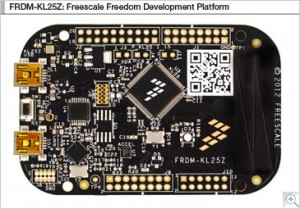 Tonight, Russ will present a closer look at the Freescale FRDM-KL25z, using some of the built-in peripherals to start building an interactive device. While building, we’ll cover some i2c basics and learn how using an RTOS can solve synchronization problems.

1) Prototyping on the Freescale FRDM platform.

3) Brief overview of synchronization problems and how RTOS primitives can help you solve them.
ALSO

Drew Fustini has passed along a heads-up about NERP being mentioned by Jason Kridner in a twit.tv interview. http://twit.tv/show/floss-weekly/269 Jason works at TI and is one of the designers of the Beagle Bone. It’s very cool that he enjoyed visiting NERP last August . Jason has a standing invitation to speak at NERP whenever he’s in Chicago.

NERP is not exclusively raspberry pi, the small computer interest group at Pumping Station:One in Chicago.