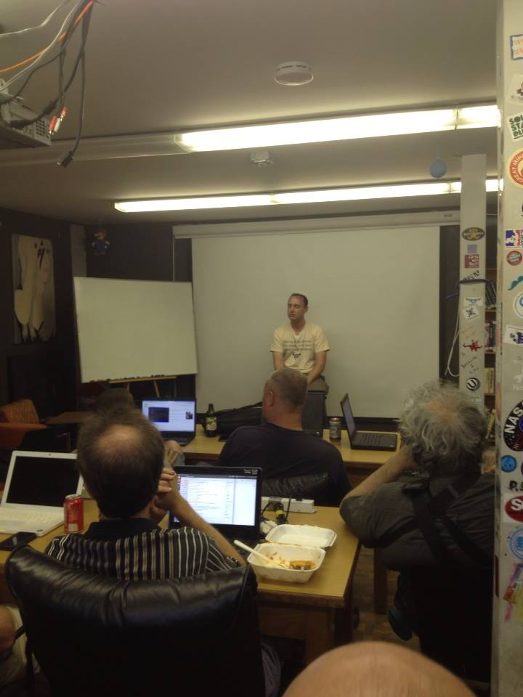 The event was a big success with over 30 people showing up to hear Tim answer questions about IBM’s Watson. Here are some pictures and sample questions (may be heavily paraphrased since they are drawn from my shoddy notes and memory) from the event: 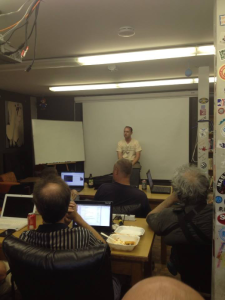 A: Watson has never been given the Turing Test.

Q: Are there plans to build a physical analogue for Watson? (Asked multiple times)

Q: Can you tell us about the specific details of what you do?

A: No, but after Watson was on Jeopardy IBM released detailed documentation

Q: Has anyone fed Watson info about itself?

Q: There seems to be a competition between IBM and Google in the realm of AI. Do you believe that the future will include more mainframe-based AI’s like Watson or decentralized neural network based AI?

A: I’m a big fan of decentralized neural networks.

Q: How do you go about getting a job in AI?

A: I have a CS degree with an AI concentration, and I got an internship with IBM that eventually led to working on Watson. I worked on unrelated projects before this. There’s no set path.

Q: Is there any project to work on improving Watson’s ability to interpret history?

A: There are many NLP (natural language processing) projects that focus on solving that problem.

Q: Why is Watson so much better than Siri?

A: Siri is not really an AI aside from its NLP abilities.

Q: What question do you wish people would ask about Watson?

A: You guys ask good questions.

Q: Do you do unit tests and end tests on Watson?

Q: Are there any Easter eggs in Watson?

Q: Do you have a button that stops Watson if it turns into HAL?

A: We’ve had no serious thoughts of Watson turning on people.

Q: Watson does not have ontological understanding of the world; any benefit to adding that?

Here are some related links to the Q&A that Tim shared afterwards:

1.)    “Here’s the IBM research journal issue on Watson, that gives away all the tech secrets anyone would want”: http://ieeexplore.ieee.org/xpl/tocresult.jsp?reload=true&isnumber=6177717