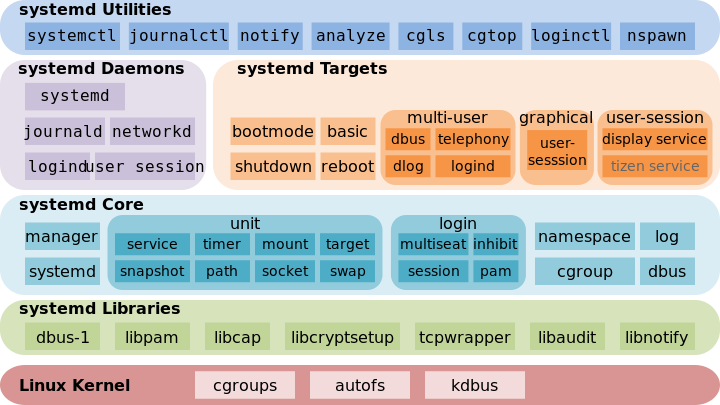 Bonnie King is a Linux Administrator at Fermilab and works on the Scientific Linux distribution. At Nerp tonight, Bonnie will give us a tour of systemd. If you work with embedded linux, this is must have, must know material.

“Linux” is the kernel of an operating system. You generally can’t see it, feel it or touch it directly, but you know it’s there by what it does. At boot, the kernel launches “init”, the process with Process ID number 1. Everything else is started by by init. On my computer, init, PID 1 is /lib/systemd/systemd. systemd is “new”, sort of. It’s been around for several years, but has recently taken over lots of core system functions that have been provided by some very traditional Unix-based tools and utilities. When I look under the hood of my Ubuntu system, it looks very different than it did a couple of years ago. What goes for the desktop goes for embedded, too.

from http://freedesktop.org/wiki/Software/systemd/
“systemd is a suite of basic building blocks for a Linux system. It provides a system and service manager that runs as PID 1 and starts the rest of the system. systemd provides aggressive parallelization capabilities, uses socket and D-Bus activation for starting services, offers on-demand starting of daemons, keeps track of processes using Linux control groups, supports snapshotting and restoring of the system state, maintains mount and automount points and implements an elaborate transactional dependency-based service control logic. systemd supports SysV and LSB init scripts and works as a replacement for sysvinit. Other parts include a logging daemon, utilities to control basic system configuration like the hostname, date, locale, maintain a list of logged-in users and running containers and virtual machines, system accounts, runtime directories and settings, and daemons to manage simple network configuration, network time synchronization, log forwarding, and name resolution.”

A number of influential people in the Linux community have strong philosophical and practical differences with the design of systemd and the way in which it’s become ubiquitous across distros. Nevertheless, mainstream Linux continues to move toward systemd and away from System V and BSD init. systemd is installed by default in Ububntu since ver 15.04. (April 2015). If you work with Linux at a low level, for instance in embedded applications, a knowledge of systemd is a must have.

Find NERP and Pumping Station:One at

For the duration of PS1’s covid restriction on public meetings, NERP meets on a Jitsi Meet videoconference at 7:20pm. A link to the conference will be posted tohttps://wiki.pu…

Check out this Meetup Group →