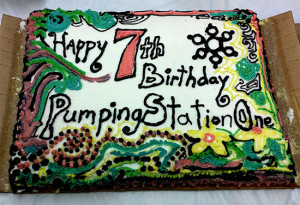 People trickled in through the evening and participated in events for our 7th Birthday Party last weekend! Grilled meats, snacks and vegan pizza were served up to the mingling masses. Lockpicking with TOOOL.us went down, a group mural went up, games were played, dyes went into fabric and a familiar face returned to our space… Carl is back! Older members will remember our glowing-eyed feline mascot from years past. Thanks to Shelly Loke, he is in working order, part of his poor broken tail and ragged teeth re-sculpted and now sporting the best logo leopard paint job ever seen. 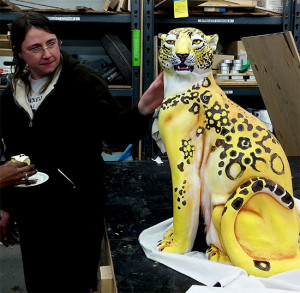 An open studio tie dye station with a plethora of socks and a few bandannas was available through the night. Even better was Burton Kent who brought in a t-shirt to color. Shelly Loke also decorated the birthday cake, starting with a base of tempered chocolate, made as she and Gerald had taught in their class last February, drawn onto the frosting. 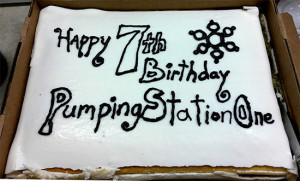 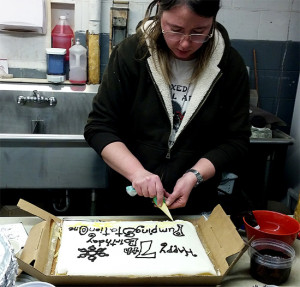 Chicago as a “whimsical city” cartoon mural took form out into the workshop and morphed into a cryptozoology sort of thing because: hackspace. Like all big projects, this was not getting done in one day but a bulk of the work went up with the help of many members. 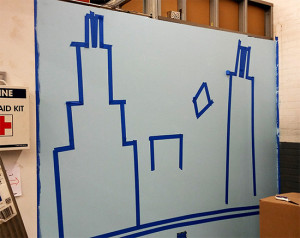 Lazy way to draw a skyline: start with painter’s tape. 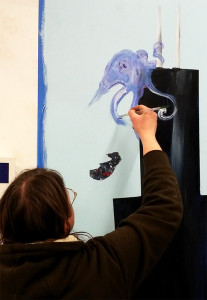 Above all, the people that came together for this celebration were a reminder why this hackerspace is so great.