Mandolin Plates on the ShopBot

My name is Ralph, and I’m an amateur luthier and PS:1 “starving hacker”.

I make all kinds of instruments: guitars, ukuleles, bouzoukis, and more, but my favorite thing to build is mandolins.  They are far and away the most difficult instrument that I make, and require a level of craftsmanship not found in the simpler instruments.

There’s only one real downside to building mandolins— the carving.  Mandolin plates are made from 1” thick stock, carved into a very precise dome shape ranging from 3mm thick at the rim up to 6mm thick at the bridge.  Making the plate accurately is the key to getting a good tone from the instrument: too thick and it sounds “dead”, too thin and the top can’t withstand the force of the strings.

To make the plates requires a set of inside and outside templates that show the proper curves (making these templates on the laser cutter was a primary reason I joined PS:1), using carving gouges to get close the the final shape, and then curved planes and scrapers to get the dimensions exact.  There is about 40-50 hours of carving and scraping that go into a set of mandolin plates.  To make things worse, the back plate is made of hard maple, which is VERY difficult to carve.  Even with leather carving gloves, my hands are a mess of blisters and callouses after making a plate.

When I saw the CNC routers at PS:1, I was immediately struck by the idea of using CNC to produce a rough mandolin plate.  Even if I would still need to scrape to get things perfect, the hard carving work (and blisters) would be taken care of by the machine.

I learned about CAM, and taught myself to use Fusion 360, only to discover that this 3D modeling stuff is HARD.  I managed to turn out some pretty simple models for bridges and headstocks, which I was able to make on the Shapeoko and ShopBot, but every attempt at modeling a mandolin plate failed.

After flailing around for many months, I discovered the Fusion 360 meetup (sponsored by Autodesk and held at PS:1), and everything changed.  With the help of Autodesk’s Michael Aubrey (Fusion evangelist), and PS:1’s resident CAD experts, I improved my skills to the point where I was able to make a reasonable model of the top plate for an A-style mandolin.

Since the plate needs to be machined on both sides, I needed to create a fixture to align everything.  It’s a pretty straightforward plate, with two alignment pegs that match holes drilled into the ShopBot wasteboard.  All of the shaping was done with a 1/2” round-nose bit running at 12000 rpm and a chip load of .35mm.

The inside is machined first, referencing the stock top.  It uses a pretty simple adaptive pocket to remove most of the waste, followed by a spiral with a 1mm overlap to take things to the finished size. 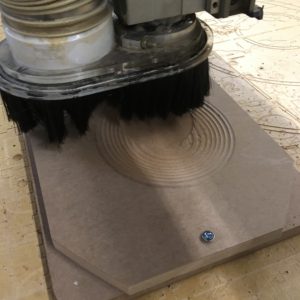 You’ll note that the pocket is not centered in the picture— my origin was in the wrong place in my model.  I fixed that, and the second attempt came out much better.  There is still a bit of scraping/sanding to remove the machine marks, but that was to be expected. 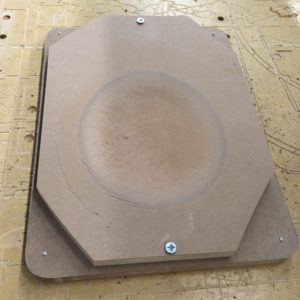 After the inside surface was machined, I flipped the workpiece over and re-registered the Z axis to the bottom of the piece.  That way, I know the thickness of the part will be accurate even if my stock thickness is off by a little bit.

Once again an adaptive pocket removed most of the stock, starting with a channel around the rim. 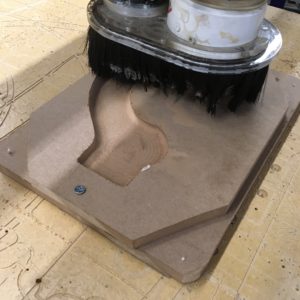 After the rim was rough-sized, the “hump” was roughed in. 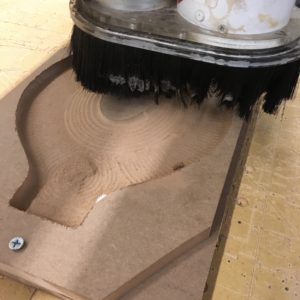 A second pass of the adaptive pocket got the rim down to 4mm thick, and smoothed the transitions. 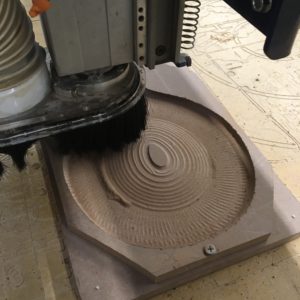 Just as with the inside, the finishing step used a spiral to clean the surface and eliminate the tool marks.  The net result was quite good, and will need only a bit of scraping to finish 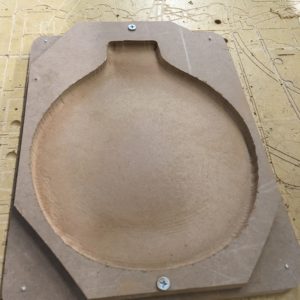 After all was said and done I swapped in a 1/8” straight bit to cut the outer profile and f-holes. 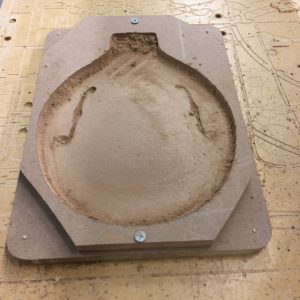 Cutting off the excess stock left me with a quite nice-looking mandolin top plate!  Total elapsed time (not counting my initial screwup) was about 90 minutes. 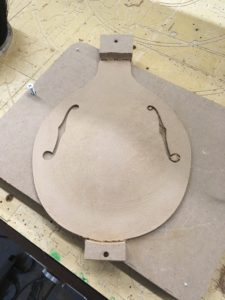 Putting my micrometer to the finished product, the results were better than I expected.  Thickness is accurate within 1mm across the entire profile, with most areas within 0.5mm.  That leaves only a bit of scraping to get things perfect!

Next weekend… the real thing, in sitka spruce.

Many thanks to Michael Aubrey from Autodesk, Ray Doeksen and Andrew Carmadella from PS:1, and all of the Fusion 360 Meetup crew that helped me along the way!  I’m still a modeling rookie, but I’ve come a LONG way with your help!