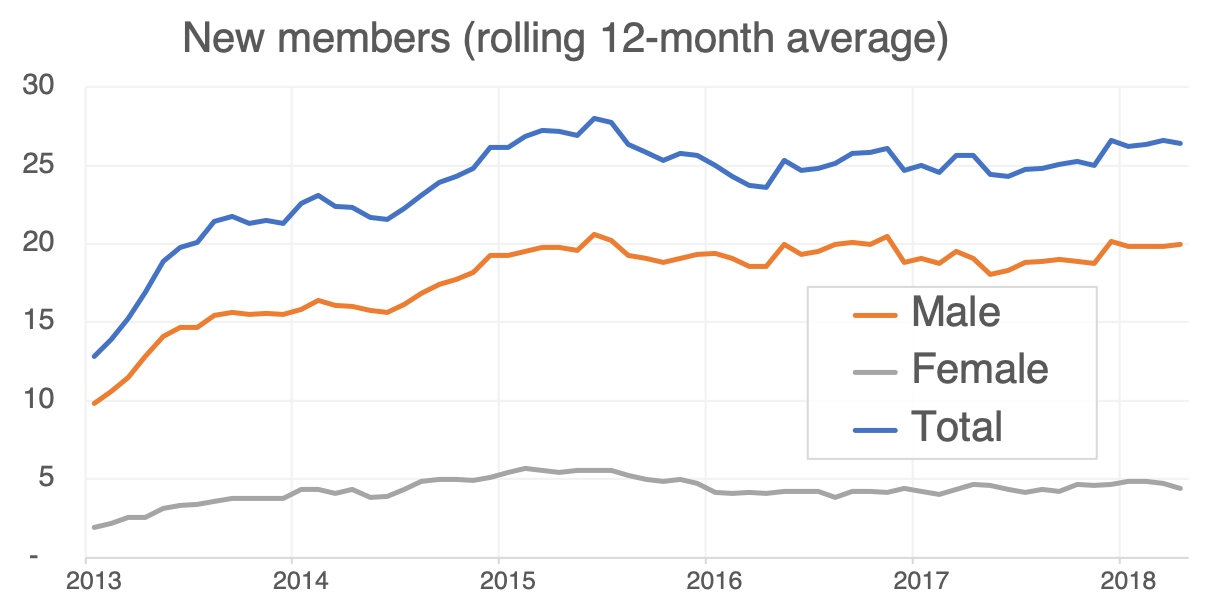 I used historical payment records to analyze member growth and member churn, the rates at which people join and leave the organization. The data set also allows analysis of how these rates differ by gender.

Growth: fairly slow and getting slower 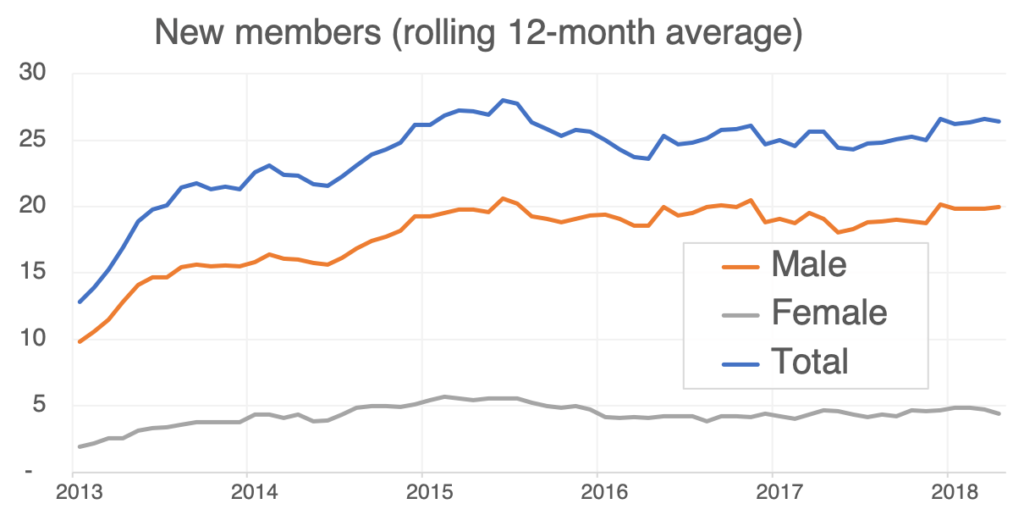 New members joined PS1 at a remarkably consistent rate on an absolute basis between 2015 and 2018. On average, 25 new members join per month: 20 men and 5 women. On a percentage basis, this represents a declining growth rate, despite the fact that PS1 dues continue to fall in real terms, and the space doubled in size and added new equipment during this period. 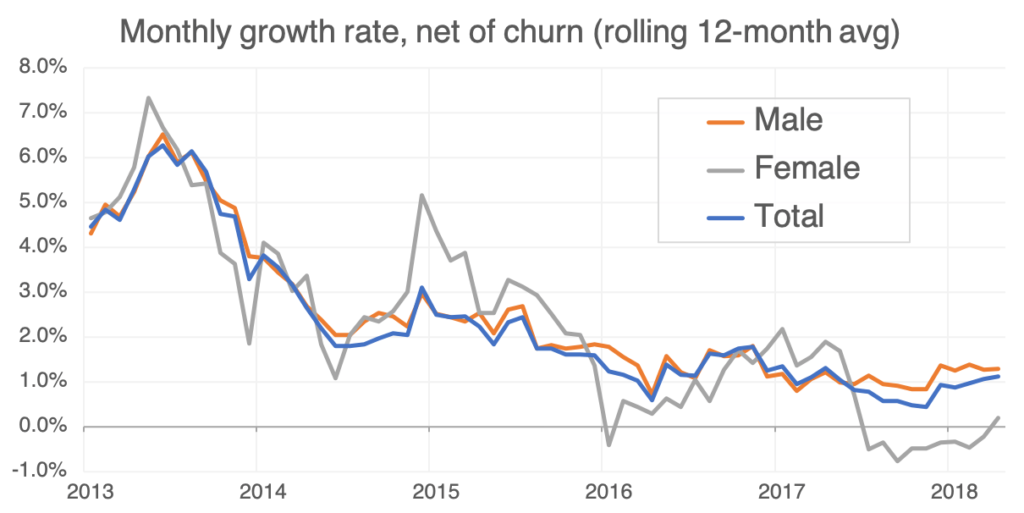 25 new members might seem like significant growth, but members leave at a similar rate. Net growth averages 1.0% per month. Net growth of female members was actually negative every month between July 2017 through March 2018.

Churn: new members don’t stick around long, especially if they are female 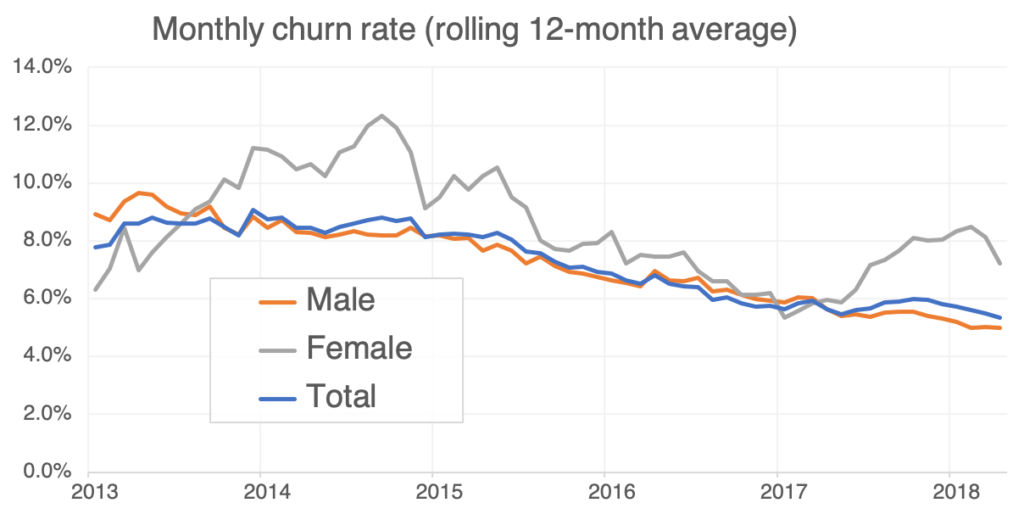 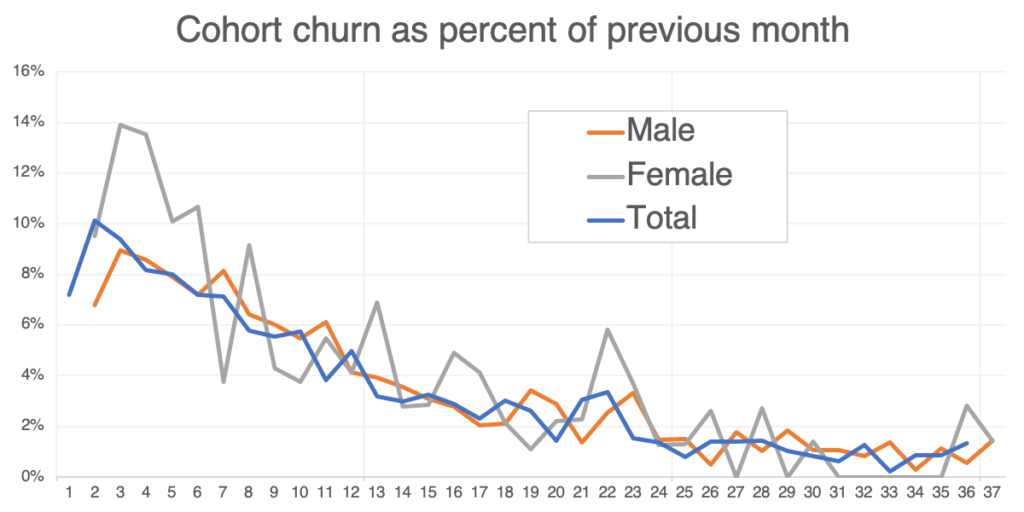 A club of older members 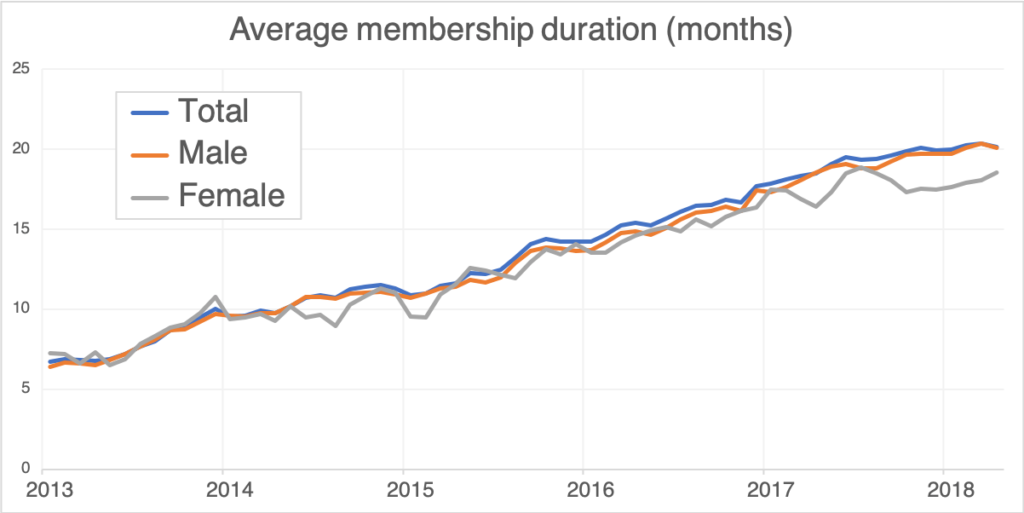 The “age” of a member refers to the duration of their membership. For example, a “two-year-old” member joined two years ago. In growing organizations, average member age is often flat or even declining over time, as new members join and older members leave. At PS1, member age has climbed steadily, a reflection of moderate growth and churn that is concentrated in new members.

There are at least two ways to view the high churn rate among new members. The first is that this reflects a natural sorting process as people discover whether there is a good fit between their interests and what PS1 offers. Perhaps PS1 is like a gym membership for many: an aspirational purchase that they don’t end up using.

Alternatively, perhaps PS1 is failing its new members. Anecdotally, many have noted the difficulty of navigating PS1’s authorization processes, rules, and cultural practices. Some might find the hurdles too high to clear.

These explanations aren’t mutually exclusive, or exhaustive. Almost certainly they are both at least partly true. The gender disparity in growth and churn, however, suggests that the hurdles are higher for some groups than others.

Less ambiguous are the implications of a high churn rate for PS1’s finances. The space’s sole source of funding is member dues. A high churn rate makes growth difficult; adds additional administrative overhead and demand for authorizations; and raises the risk that the low net growth rate could tip negative with small changes in underlying trends.

See a more detailed analysis and discussion the methodology here.

Update: great event! A recording is available here. All are