It was beautiful, strange, majestic, awkward, silly, sexy, and most of all, it was fun. 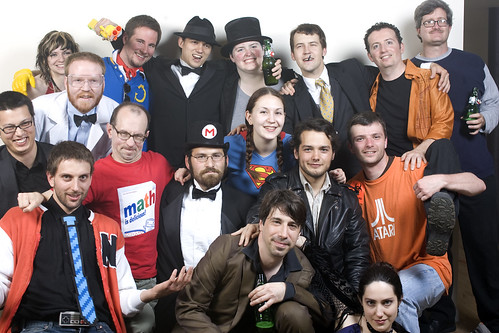 You might have seen me running around with a clipboard early-on, desperately trying to get things all started on time. What surprised me was how early people started showing up. People came before the posted door time of 9 ‘o clock, and I kept telling them to come back in a little while. A whole gaggle of girls in evening / cocktail dresses showed up just ten minutes into the event, full of bubbly energy and at that point I knew it would be a success. I was proud of the fact that people dressed up for it in fact; the idea of it being a prom had been taken seriously.
I’m thinking back to the origins of the event. Back in March, I think. The idea came to me before we had settled on a space for Pumping Station One, and it wasn’t original. Back when I was a bike messenger, every year some of the more active messengers organized the Messenger Prom, which was a benefit for a co-operative startup company at first (Four Star Courier Collective), and later became an accompanying party to the yearly Cutting Crew Classic, an alleycat race that drew hundreds of racers from many cities across the U.S. The Messenger Prom was a success year after year; why not have a prom for hackers/makers/nerds? I was calling a “Nerd Ball” at the outset, but I think Nathan Witt started calling it the “Geek Prom,” which was catchier, anyway. 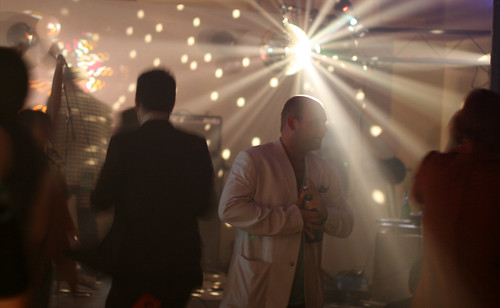 So one meeting, I simply announced: “I’m going to organize a fundraiser party. Anyone want to help?” I don’t know if it was at that meeting, or a later one that Nat Ward jumped in to help me organize it. We knew early on that there was going to be plenty of DJ’d dance music, so we looked for bands that would complement that with something different and eclectic. To sum up a long saga of bands that canceled on us, rescheduled, re-canceled, and some that jumped in at the last minute, we ended up with Thin Man as the headlining band. Two guys who were practicing their experimental electronic music at the Co-Prosperity Sphere asked to jump in. I think they ended up picking the name “Nissan Explosion” for themselves about ten minuted before they played, but I don’t know if they stuck with it. Lastly, a band called the Black Ponies (I think) clawed their way into the lineup the day-of.
The Science Fair aspect of the Geek Prom I have to admit was a bit last-minute. In retrospect, it was something that warranted its own publicity campaign to simply get a good amount of participation. In the end, the geeks of PSOne threw down and delivered some really neat displays for the Fair. I have to give big props to John Stoner for having two displays, despite the inscrutable font sizes. There was certainly plenty of reading material. Nicole’s Commodore 64 exhibit was clearly the winner, and I think in no small part it was the colorful presentation that won it for her. 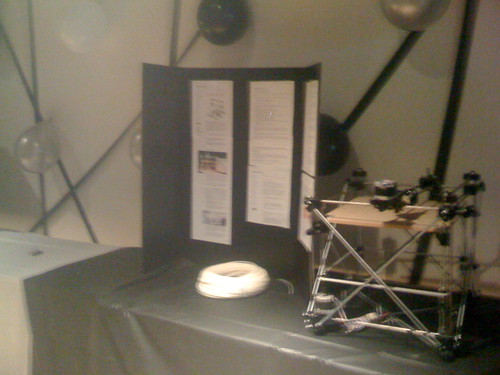 For her, the prize of $100 worth of science supplies was donated by American Science & Surplus. For the best-looking couple, **DJ Liz “Revision”** provided some of her hand-crafted jewelry, made from electronic components>, in addition to being the first DJ to play. **Erik Qwaitek**, who supplied half the audio gear and party lights, DJ’d between the bands with some classic 80’s dance hits. **”Dragon” Josh** took us late into the night with a electro-dance / electronica set. By that time, I’d set the clipboard aside so I could dance.
After all was said and done, we made almost $600 after expenses (note that some of those expenses were beer, liquor, and pizza). I know we could have made more money, maybe with some more promotions (big thanks to Anne for going out with Dan Krol and John to promote in Pilsen; thanks to Jeff Kantarek and Sacha for promoting at the Division Street Fest) but like all events that rely purely on volunteer effort, you get out of it what everyone puts in.
A lot of people contributed to putting on this event (Eli for rounding up sponsors; Dave for supplying lasers and setting those up; Nathan for creating the flyer and setting up the web stuff; Eric Micaud for hosting; **Edmar** of Lumpen fame for letting us put on the event at Co-Pro Sphere for cheap, AND being the bartender!) and more importantly than the fund-raising aspect, it was a great kickoff for Pumping Station One. It was a great pleasure to put on the Geek Prom, and I’m pretty sure we’ll be making this a yearly event, until the zombie apocalypse or glacial melt-floods kill us all.