We are fermenting up a tasty frothy storm over here in the PS1 kitchen! We have about 10 gallons of beer that are currently in the works. In Brewing Station: One, we now have all of the equipment needed from home brewing. On Thursday January 23 we hosted a collaboration with the CHAOS brew club in Chicago (www.chaosbrewclub.net ((which stands for Chicago Home-brewers Alchemists of SUDS)) where alchemist Brandon K. took us through the steps of the brewing process from set up to break down and cleaning. By the way, we have provided a laminated sheet of paper with the instructions explaining the right measurements of chemical to water ratio for the sanitizer to be effective, which is VERY important for the brewing process. We learned about how brewing beer has a hot side and cold side. The hot side is leading up to and including the boil, once the brew comes off the fire it is considered to be on the cold side, and everything on the cold side needs to be sanitized when coming into contact with the “WORT”. For the Tropical Stout beer that we are going for, we used the Bohemian Lager yeast that was grown and watched over for weeks leading up to the brew. An interesting quirk about this beer is that it uses a lager yeast but is brewed at a warmer temperature, ie: PS1 room temperature, as opposed to the typical controlled temperature for lager brewing. The hops that were used were Magnum hops and were added in on the hot side and boiled into the wort. We hit the mark with our numbers and calculations for the Tropical Stout we reached an original gravity 1.070. The “Resurrection Stout” will be ready to consume in 2 weeks time, so stay tuned!

For all of you that came to the brew night and participated thank you. For all that could not make it and are interested in getting back into the swing of beer church, something similar, or have a different idea for a class in the kitchen (someone had mentioned bread making!!!!???) please reach out on slack, google groups, or your platform of choice and lets keep the culture going!

As you may have noticed, the Small Metals area has moved to where hot metals used to live. The process has been gradual but successful. We conducted an experiment over the weekend involving plaster investment and molten bronze. There were many variables in this process including new-to-the-space machinery: the kiln, the electric melting furnace, and the vacuum investment table. As well as different materials used, possibly expired flux, a new kind of plaster, and a type of bronze that had been melted a number of times before. All in all it was a great success. Here is a brief overview along with some photos to enjoy. 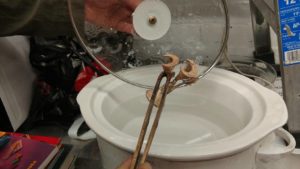 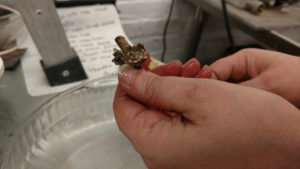 Fresh out of the pickle! 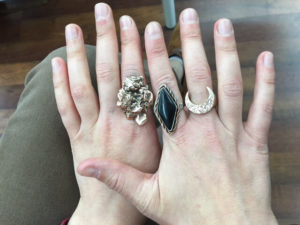 Finished rings! All of them (except the black stone in the middle) were cast at PS1.

This is a turkey vulture pendant that I created as per request of a member here for a birthday present. The recipient is a Naturalist for the Nature preserve here in IL.

So how I went about creating this: created the design through Adobe Illustrator, laser cut the pendant out with our Epilog  laser engraver, and did a lost wax cast to get the final piece in sterling silver, then added a patina to the metal for the shading.

In compliance with Governor Pritzker’s “Stay-at-Home” executive order, PS1 will be closed March 21 through April 30.