Tonight starting at 8pm Pumping Station: One will be hosting our first PotLuck style public meeting.  Tonight’s theme is The Internet.  We’ll have bacon wrapped bacon, a Peanut Butter Jelly Time Station with a live Banana Man and much, much more.  Come down and show off your culinary hacking skills.

Pumping Station: One is located at 3301 N Elston Ave.  Look for the big red door and follow the signs.  The front door will be open at 7pm but expect the fun to start at 8pm.  If you have any trouble getting in press the buzzer on the top left of the door.

On Tuesday, March 30th, Pumping Station: One will be having the first food-centric open house at the space since we switched up our weekly Open to the Public meeting schedule.  The theme for the first fifth Tuesday PotLuck is The Internet.  Doors are open to the public starting at 7:00pm at 3354 N Elston (Look for the Big Red Door). We’re hoping this devolves into a pre-show for Chicago’s upcoming BaconFest; but even if it doesn’t that’s ok too.  Look all over the net for recipe ideas, come up with catchy names and bring your food for everyone to try.  If it’s ok to be ingested then it’s welcome here.

If you’re bringing food, plan to have a tasting for a maximum of thirty people.  If you need to reheat something, we only have a microwave and an induction cooktop (which can only heat ferric materials).   If you need other accommodations or have other questions leave them in the comments or send an e-mail to jeff [at] pumpingstationone.org

I’m pleased to present our first PS:One Guided Tour on this Tuesday February 23.  Our guest is Joel Kuennen, who will lead a discussion about the technological singularity.

The End of Modernity, the Birth of the Singularity: Cultural Implications of the Technological Singularity

Modernity is defined by philosophers and historians as a stage in human culture which is referential in nature; a state of being which collapses time through its signification of past, present, future. It is fundamentally paradoxical. A contemporary, modern moment consists of a spectrum and gains meaning through the relations of the points on this spectrum. How we think, act, and feel are all bound to this conception of being in time. We are born into a cultural unit with a specific history, a specific ontology that defines our social roles and positions based on recordings of past occurrences. The present is congruent with the past and history assures us of this. We live and someday will die. We surround ourselves with momento mori as to not forget the meaning that can be associated with every breath. Life is short. It is transient, a blip. We will die someday. This is what we in our culture believe.

This view is what determines meaning in our lives but what happens once the threshold of the singularity has been crossed? Once death is no longer a promise but merely a possibility? Once the present is so different from the past as to detach itself from the reflexivity which has so far defined modernity and the meaning of everyday life?

Joel Kuennen is a graduate student in the Masters of Arts Visual and Critical Studies program at The School of the Art Instiute of Chicago. He is a contributing writer for Chicago Art Magazine and FNews Magazine as well as a practicing artist who works primarily with digital video and multimedia installation. His theoretical writings concern cinema studies, new media studies and contemporary subjectivity as inflected by spatial relationships.

This sounds like an exciting topic, I hope you’re all looking forward to it as much as I am!

We’ve updated our weekly meeting schedule and the third Tuesday of the month is going to be our monthly Open House.  While there’s no official business being conducted anyone should feel free to stop by.  New members and old members alike are encouraged to get certified on all our wonderful tools, talk about projects and build.  If you’ve never visited and you’re interested in seeing the space Tuesdays are the perfect day!  Meet your fellow hackers, discuss projects and join our growing community.  We hope to see you there!

The doors will be open from 7pm until the last member has left.  As usual the space is located at 3354 N Elston, just come through the big red door! 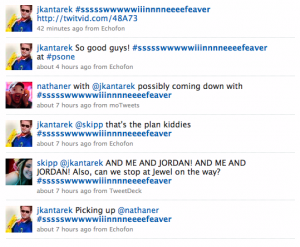 There’s a few members here at PS:One that are currently out of work and are making the most of the money we have.  We don’t get to go out very often so to bring cheer to our year we decided to start Chili Club.  We cook during the day when everyone else is at work and have a delicious time.

Our first meal was Chili, a fantastic recipe from Tyler Florence.  After simmering the chili for two hours on our induction cooktop we swapped to the crock pot and started on the cornbread.  Things got a little more interesting because cornbread on a cast iron skillet is supposed to be made in an oven, which we don’t have.  Fortunately the induction cooktop has temperature control, which worked perfectly after covering the top of the pan.

We were using the hashtag #ssssswwwwwiiinnnneeeefeaver on twitter in honor of SNL. Chili Club is going to be a once a month, stay tuned for next months meal! 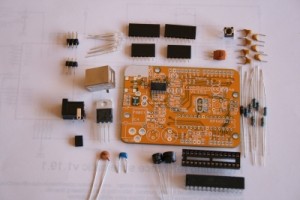 Rebooting Transistor Thursdays with a “Solder Your Own Freeduino” workshop was a huge success.  Huge thanks to NKCelectronics for helping us track down the package in time for the class.  Starting this Thursday we’re going back to basics.  We’re going to be making home made electronic components the same way Georg Ohm, and Alessandro Volta did when they were exploring electricity in the 1800s.

We’re going to have another solder your own arduino workshop next month for those of you who couldn’t get a ticket.  The next workshop is going to be on a weekend and have some portions tweaked and retooled.  Thanks again to the first group who helped us out with some great feedback for this first dry run.  Stay tuned to the blog for more details.

Jordan and I wanted to restart Transistor Thursdays with a focus on application.  We’re going to be kicking off a six week course with an arduino workshop.  We found the freeduino online and put together an eventbrite event (http://www.eventbrite.com/event/472143193)  to do a group buy on kits.  The class is going to be Thursday December 3rd at 8pm.  Please buy tickets as soon as possible so we can make sure there are enough kits for everyone.  Ticket sales will end one week before on Monday November 23nd at 10pm to make sure there’s enough time for delivery.  Pumping Station: One will be providing all the equipment to do the soldering and practice soldering to make sure you learn at least one new skill.

We’ll also go through training on all of the electronics equipment (Oscilloscopes, power supplies, multimeters, LCR meter, and the function generator).

Ever since I saw this instructables I’ve wanted one for my own.  But I wanted something better.  I added a couple small touches like removable arms and tips, a powered enclosure, and suction cup feet.  The swap-able powered tips are the best part, there are standard alligator clips but also a magnifying glass, LED spotlight and soldering fume extractor.  I’m happy with how it’s working so far and i can’t wait to actually build more with it in PS:One’s newly branded Shock Shop.

I built this with a combination of supplies that were at the hacker space and parts from Radio Shack.

Geek Prom is coming up this weekend, our Lawyer Nicky has been hard at work…

Share this!
Our fearless leader, Eric Michaud, talked to Chicago’s own Chicagoist about hackerspaces and Geek Prom on their podcast, check it out here; Eric jumps in around 22:50.

Chicagoist’s podcast is available on iTunes and through RSS.  Huge thanks to Karl Klockars for letting us come on the show!