We had a great year at Detroit Makerfaire and ran out of our kits in about 3 hours everyday. Thanks to all of the volunteers who headed out and helped teach other Makers about our noisemaker kits! 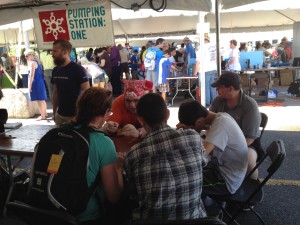 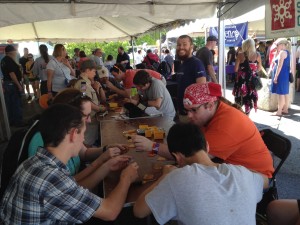 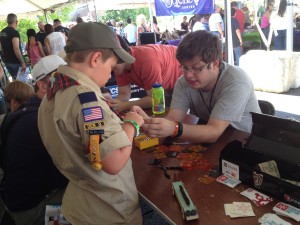 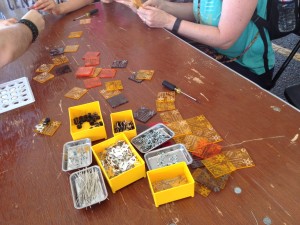 After a successful Makerfaire in Detroit, please keep in mind that the next Makerfaire is coming up quick. This is the South Side Mini Makerfaire, Saturday August 8th at the Ford City Hall. We need both donations and volunteers! Please email [email protected] if you are interested.

VIMBY – Take on the Machine: Episode One

This summer PS:One participated in a secret project. VIMBY contacted us and told us to be prepared to receive an envelope from Mitch Altman one Wednesday with our challenge inside. The above video is the first in a series called Take On The Machine. Each participating space, NYC Resistor, Artisan’s Asylum, The Transistor, and Crash Space and us will have an episode airing with their project featured.

Stay tuned to find out what we did with our VIMBY money.

Adults who missed the thrill of Power Wheels or Little Tikes cars as a child now can go one better: by modifying the battery-powered child-size vehicles and competing at Maker Faire Detroit. Teams of DIY mechanic enthusiasts have been upgrading the small-scale cars far beyond stock performance levels to win prizes and bragging rights.

Among many other activities at Make magazine’s Maker Faire at the Henry Ford Museum in Detroit, July 31–August 1, the DieHard-sponsored Power Racing Series (PPPRS) will premiere. In its inaugural year the event was internal to PS: One, but this year brings teams together from far beyond the Midwest.

Jim Burke, a Pumping Station: One Director-at-Large and the Director of the PPPRS, said “I want Makers to meet face to face with a common project. Modifying and racing these toys is fun, creative, and challenging.”

This year, with DieHard Platinum batteries and chargers powering the series, nine teams from six different hackerspaces and makerspaces will compete in the three events of PPPRS: a drag race, a road race, and an endurance race. The PPPRS will be a main event at Maker Faire: Detroit, and families are encouraged to attend. We hope to see you there!

In compliance with Governor Pritzker’s “Stay-at-Home” executive order, PS1 will be closed March 21 through April 30.