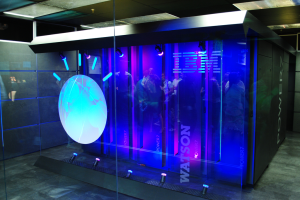 Using a beta version of Chef Watson, we will attempt to create whatever wacky recipes come out of Watson’s “mind.” Come join us for some artificial-intelligence driven fun!

The way it works: you input ingredients that you have on hand into Chef Watson, which will then output a recipe for you, usually adding more ingredients. Feel free to bring your own, and we will probably be making a trip to Jewel.

Our kitchen was built about a year ago to fulfill the desires of a group of foodies at Pumping Station: One called PS:Yum. They wanted a place to be able to cook and store food that was separate from the shop. Since then, the kitchen has hosted many fun events like Beer Church and a liquid nitrogen ice cream social. Within the last two months–since June 16th, to be exact–the kitchen acquired a new area host. I recently got a chance to sit down and interview Arturo, the aforementioned area host. He has done amazing work with the kitchen so far and has even grander plans for both it and PS:Yum in the near future.

Since becoming area host, Arturo has not just made the kitchen cleaner and more functional, but has also added much useful kitchenware. Recently, he bought new table and drying mats, to make cleaning up after snacks much easier. He has also started recycling cans, which he plans to melt them down for their aluminum. There was an impromptu hot dog party in the kitchen recently thanks to him. It was a lot of fun and really encouraged people to utilize the kitchen for more than just cooking. The kitchen fulfills a similar function to a water cooler at work; it is a place to get refreshed and take a break from projects to talk to your peers.

PS:Yum now includes anyone who enjoys cooking at PS:One and the people who eat food cooked during PS: Yum events. This essentially broadens the original group to include most people at the space. The high interest shown in PS: Yum is very encouraging. Future plans for the group include allocating some land from the alderman for an urban community garden. Other plans include a session where our amateur chefs cook recipes that IBM’s Watson artificial intelligence has created. Even more future uses for the kitchen include doing applied science experiments and holding cooking related lessons. Contact Arturo, Noonie, or Ryan for more information.

I have to say I am extremely impressed the hard work Arturo has accomplished in such a short period of time and look forward to more improvements and events from the kitchen. Good luck on your future kitchen and cooking endeavors, Arturo!