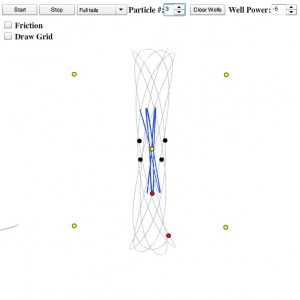 In a previous job, I made flash apps to accompany math textbooks that helped kids learn things
like trig functions and integrations by showing them visual
representations of what they were doing. After a while, I started making some apps on the side and ended up with this
physics simulator.

This app is at times a gravity
simulation and at others electricity and magnetism.
Basically, you can place “wells” that vary from being very
attractive to very repellent, and then release “particles” into
this system that you have just created. The system operates on a
very simple set of rules; the closer a particle is to a well, the
stronger the force it feels from that well. This led to fairly
simple and straightforward code that reached the desired result. In
addition, I added in the ability for the particles to trace the path
they have taken which allows you to see if the particles are entering
into repetitive orbits and draw pretty, pretty pictures. The actual
app is located here with the directions to run the simulation on the
page as well. Enjoy! 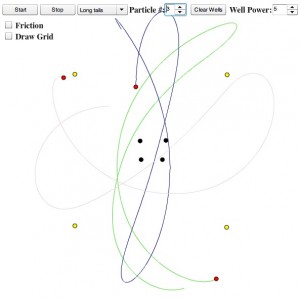