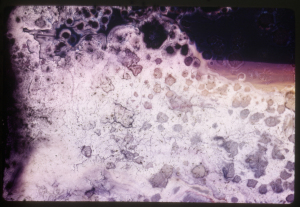 This past week I had the chance to look at a damaged piece of Kodachrome film using the SEM. Many thanks to Ryan for being an SEM sensei and preparing my sample!

I had recently acquired a box of sixty year old slides from my grandfather, visibly moldy and containing almost no recognizable subjects. The Kodachrome frames are unlabeled except for one: “Pat” written in pencil. I digitized them using a high res flatbed scanner and the resulting images are abstracted, textural, wrinkled, aged, rotten layers of purples and browns. In a few of the slides, a section of a window is visible, a head of a horse, two posed women. Pat turned out to be totally enshrouded in a mold veil, like most of the images. She along with the other photographic subjects had been displaced by  abstracted, festering growths.

Sinewy veins stretch across, interspersed with round sacs and sac covered cylindrical pellets. Some other spherical growth breaks the surface creating a hungry alien mouth form. These images got me thinking about the many complicated layers of cultural artifacts. The film slides are part of my family archive, they indicate 1950’s photo technology, they’re fragile physical objects susceptible to mold growths. What do valued objects/ object of nostalgia become when they are separated from their initial purpose? What does it mean to keep a box of film if the intended images are no longer there? The photographer, the creator of the original image, has been deprived of his control as biological functions resulting from imperfect environment and time have taken over.

In a sense, I hope to continue the life of these objects by pushing them into their new life as veiled, abstracted images, reminders that physical world continually effects our efforts to preserve and keep stagnant. While I don’t know who Pat is, or what she looks like, I have a pretty incredible image of something related to her. 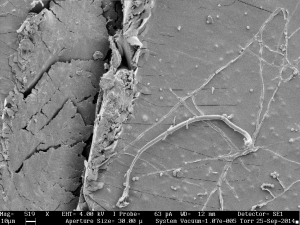 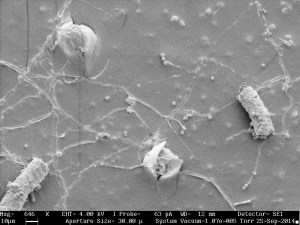 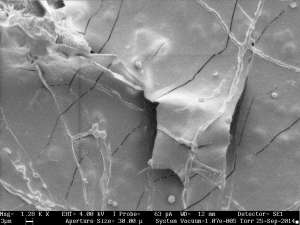