Last night was a busy night at the space.  Toba was working on a project that will be the subject of a later post.  Ryan and Steve were working on repairing our laser cutter.  And Loclhst, James and I did a little bit of making.  (An ironic activity at a maker space.) 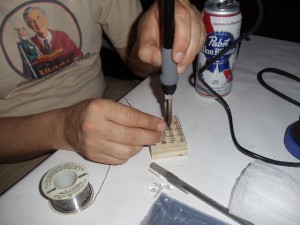 There is something that’s just.. right about someone soldering at PS:1 while drinking cheap American beer and soldering some artsy-fartsy LED toy.

James completed two levels of his cube.  Localhst did two of his own two.  He also built a 12 volt power supply to drive a solder fume extraction fan.

One of the LED cubes did reach a functional level of completion.  If you’d like to see more of the process, and a little more commentary, stop on by my blog: http://realtinker.blogspot.com/2012/03/cubists-interpretation-of-blinky-led.html

And here’s what the end result looked like: [youtube]http://www.youtube.com/watch?v=xtRzyJpFEdk[/youtube]

Obviously it’s not finished yet.  Steve gave me a laser cut project box to put my cube in.  Hopefully James and Loclhst will finish their cubes soon too.

And as always, come on by, there’s usually something interesting going on!