Don’t let the polar vortex’s return prevent you from standing around a boiling cauldron of delicious smelling beer wort as we prepare to create what’s bound to be a unique beer. We usually base our recipes on existing ones, but tweak them in interesting ways.

To start off, we’ll have a beer tasting featuring any homebrew you bring, a Gingerbread Brown Ale that we brewed in December, and the aged return of 14 month old “I Didn’t Mead It That Way”, a session mead made with hops and fermented with wine yeast for a very unique and floral flavor. Tiny beer steins will be provided – please bring a bottle of something if you can. We might even pull some mystery bottles from our homebrew cellar and see if we can remember what it is!

Once we’ve had a taste, met each other, and talked over the basics of brewing in the process, we’ll move on to shopping for ingredients (Brew & Grow is right around the corner, and you’ll get to learn how to weigh and grind ingredients) & of course brewing the beer. This is just the first day of a weeks long journey that a beer takes from the boil kettle to your mouth, but it’s the most labor intensive and the most interesting to see, so we like to show people this step. Watching a bucket ferment isn’t as fun. Since we’re going for something relatively straightforward (recipe to be a surprise), we’ll probably be done brewing in around 3.5 hours. We’ll get into the brew by around 3PM. The steps include mashing, sparging, boiling, chilling, and pitching. You can lend a hand with most of them if you like, and learn a lot in the process. 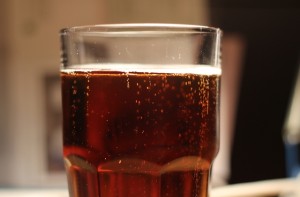 When: Sunday January 19th 2014, 1PM
Where: Pumping Station: One, 3519 N Elston, Chicago
What: Beer tasting and brewing hands-on
Who: Anyone 21 or over, Pumping Station: One members or not!
Why: Because beer is a fun way to spend for your Sunday afternoon