On March 26th, our PR director forwarded an email to one of our mailing lists. This email detailed the Chicago Northside Mini Maker Faire, which was to happen in a little over a month. I decided that PS:1 needed to have a presence there, and it couldn’t just be a booth with some folks sitting behind it talking about hackerspaces all day.  An electronic project was very much within my skillset, but I didn’t want it to become yet another ‘how to solder’ class — they had one or two of those already. I wanted something that could be assembled quickly and offered a chance to talk about electronics if the assembler was interested. If they weren’t, they should have a fun doodad to walk away with.

I needed a project, something that would engage kids and adults. Something that was easy to assemble, cheap and offered a chance to learn a little bit about electronics (but didn’t require it!). I recalled a field trip I went on in high school. We went to an engineering firm or something, and they had us assemble little crystal radios on card stock. There were just four components that twisted together on the back, then you hooked up the crystal earset and bam! crappy radio.  I settled on a crappy optical theremin – using a photoresistor to modulate the pitch of a buzzer. 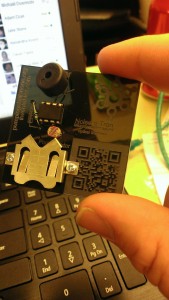 Thinking about it, I decided I could probably manage something pretty cool with five components or less if I used a microcontroller of some sort. I settled on the Atmel ATTiny45, which is an AVR in an 8 pin DIP package. Some clever folks have already ported the Arduino libraries to work on these small chips, so all I had to do was come up with a design and write a few lines of code. I won’t bore you with excessive details, you can check out the github repo.

I learned a lot with this project, and  I think some other people did too. I had kids as young as 5 assemble these boards with guidance, some of them with surprisingly little help. Everyone seemed to like them, and I ran out of components for kits. I’m calling it a huge success, and I hope that this project is replicated and taken to other faires, expos and ‘learn electronics’ nights.   –Derek