For the 100th NERP Meetup (Yea!), we’ll have the second of a two-part discussion of embedded GUIs on small Linux devices. Qt is much more than a GUI library. Tonight Ron Olson will share some wisdom on the Qt application framework. Ron tells me that Qt promises a lot, and it delivers. Sounds good to me!

Ron says “I figured the main thrust of the talk would be Qt, how it works, its two main parts (C++, QML), and how it works with the BBB as well as a Qt project controlling an Arduino, all with an eye towards demonstrating the QML, and lightly, the C++ connection.”

After graduating from NYU’s film school, Ron took full advantage of his film and theatre background by becoming a software developer. For 24 years, Ron has been one of the developers that companies go to when they want to make their customers lives worse; he helped write the system to show commercials at MTV, worked on cancelled projects at an animation studio that went out of business, pioneered allowing you to lose your retirement savings on the web at Bankers Trust, came up with new ways to target ads to you at DoubleClick, did his part in the financial crisis at Goldman Sachs, and lately has been writing software to help your attorney remember when your trial date is.
Mostly in C++ and Java.

Officially announcing the creation of Newbie Programmers’ Office Hours! This will be like PYOO, but specifically with a focus on beginning programmers. We are language agnostic.

Please bring a laptop and we will try to help each other with projects and tutorials. If you don’t know what to work on, we will give you a suggestion from our resources page on the wiki.

For experienced programmers: you are welcome too!

When: Every Saturday at 7 PM
Where: Upstairs in the Electronics Lab

The Teensy name has been around for several years in the land of 8-bit MCU boards, but the 32-bit Arm platform introduced in Teensy v3.0, is a game-changer. PJRC (http://pjrc.com/teensy/teensy31.html)sent a few Teensy 3.0’s to Anna (our Electronics area host) at PS:1 with no discussion or fanfare. Thank-you, PJRC.

AT NERP TONIGHT, Ed will show the Teensy 3.0 hardware, Arduino tools, and some sample programs. After that introduction to the Teensy 3.0, Colorado Rob will show how he programs the Teensy 3.1 with a combination of tools and utilities from Eclipse, GNU, Freescale (manufacturers of the Teensy ARM MCU), and freeRTOS. ALSO – We’ll also raffle a new in box original aka white BeagleBone. Thanks to Drew for the donation!

The Teensy 3.X’s cost less than $20 and include all the peripherals you expect in a regular MCU. Some specs on the Teensy 3.1 are:

The 32-bit ARM chips are internally much more complicated than 8-bit processors, but the user doesn’t have to be aware of this when programming them. The Teensyduino IDE from PJRC provides a familiar user interface and Arduino(TM) libraries that make getting from zero to blinky very easy. There are additional libraries that provide access to some of the ARM-specific resources such as the USB port.

I’ve been exploring the v3.0 samples and am pleased with their sale price and performance. My setup is the basic Arduino install + Teensyduino on Linux. After doing the Arduino install I played with some sample code that does HID mouse and keyboard emulation on USB. Making it work was pretty straightforward.

I have been playing around with the Teensy 3.1 for a few days. It’s an ARM board for $17.
http://store.oshpark.com/products/teensy-3-1

My thoughts on it so far are that the CPU is way overkill for most embedded things that you’d program with the Arduino programming environment and library.* Also, there is a huge increase in complexity to overcome to program if using “real tools”. But the Arduino tools are easy to set up and use. But for my embedded project, the Freescale CPU it uses has the potential to save a bit of money. Even though the CPU costs more than the AVR part I currently use, it includes a USB controller and a voltage regulator, so those component costs go away. I’ve been following a tutorial for setting up a dev tool chain for these CPUs using Eclipse, GCC and Freescale’s tools:

I’m looking at FreeRTOS (modified GPL) now. I’ve just gotten the ADC working with DMA which is pretty cool. My completion handler gets called when there are 32 samples ready for me, which is what I need for the carrier detect algorithm. The Freescale tools are pretty powerful for what they allow you to do, and an RTOS provides interesting departure from the sequential programming typical of Arduino development.

*Rob and I differ on this point…

NERP is not exclusively raspberry pi, the small computer interest group at Pumping Station:One in Chicago.

Brian Chamberlan will tell us about using Erlang to program/control the RaspberryPI/BeagleBone. Erlang is a functional, general-purpose concurrent, programming language and runtime system. Erlang provides language-level features for creating and managing processes with the aim of simplifying concurrent programming. Processes communicate using message passing instead of shared variables, which removes the need for locks. [paraphrased from wikipedia]

Michael Beck will show us how to set up Xbox Media Center, XBMC on the Raspberry Pi. Pretty much every possible mode of interacting with a digital media stream is supported by XBMC. The Raspberry Pi’s excellent (but proprietary) video rendering hardware makes it an ideal platform for building a home media center.

NERP is not exclusively raspberry pi, the small computer interest group at
Pumping Station:One in Chicago.

There are a bunch of credit card size and smaller computers out there, but the
one closest to the Raspberry Pi in purpose and features is the Beagle Bone. The
BeagleBone is a credit-card sized Linux computer that connects with the Internet
and runs software such as Android 4.0 and Ubuntu. NERP first saw the Beagle
Board during Drew’s high-level overview in March.

The current Beagle Bone (~$89) costs more than the Raspberry Pi, but the Bone
has better perfomance. Tomorrow, 4/23/13, circutco.com will publicly announce a
new, more powerful, more featureful, and cheaper Beagle Bone. The price for the
new board will put it closer to the Pi. The revolution is over, but the
competiton for the smallest, most powerful, most versatile, and cheapest
embeddable computer has just begun. Adafruit, one of several Beagle Bone
resellers, is getting revved up for the new release.

Tonight Brian Chamberlain will give an in depth introduction to writing code on
the Beagle Bone. Brian’s talk will  “…cover how to setup and run remote
debugging on a BeagleBone from within the Eclipse IDE. It will include a
walkthrough of the key steps for setting things up. Then a demonstration of how
to step through lines of code, inspect variables, and generally cause havoc on a
simple program running remotely on the BeagleBone. Also, as a segway from our
normal RaspberryPi discussions there will be a brief overview of the BeagleBone,
its features, and how it compares to the RaspberryPi.”

Monday Dec. 3rd. is back-to-basics night at NERP. In Part 1, Carl
Karsten and Bonnie King will give an introduction to Python programming
for novice programmers. The target will be the Raspberry Pi, and the
focus of their teaching examples will be on input/output to simple
hardware. In Part 2, yours truly will demo control of output devices
including simple circuits for interfacing electronics to
electro-mechanical devices. 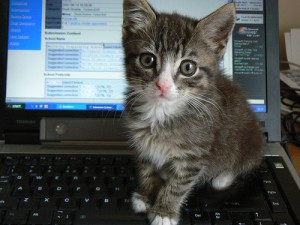 There are loads of people who want to learn how to program, and thankfully there are loads of high quality free tutorials and classes from big names like MIT (the class a small group of us are currently using), Stanford, and Google, from start-up educational resources like Khan Academy or Udacity, and other free resources like Python-course.

All of the courses listed above teach the easy-to-learn Python programming language.

Starting Thursday, May 17th, every first and third Thursday of each month PS1 will hold Python Office Hours.  This is a chance for people learning to program in Python to get together for moral support, project assistance, and homework assistance.  We’ll have an experienced python developer or two on hand to help answer questions and explain difficult concepts, plus loads of students at all skill levels to provide assistance and community (there is no better way to learn than teaching!).

This is an “office hours” event with volunteer teaching assistants. The expectation is that students watch lectures, read tutorials and attempt homework on their own, then use this as a resource to aid in learning, not as a class, workshop, seminar, private tutor session, or other primary learning tool.

PS: in lieu of apples, our TAs prefer adult beverages as thank-you presents.

In session 2, we read analog sensor input into the Arduino, and had the Arduino print the data to a character display.  In session 3, we will read sensors with an Arduino, and then interpret the data to control the position of a servomotor. If you want to build an Arduino-controlled entity that has physical motion, this is a very good place to start. 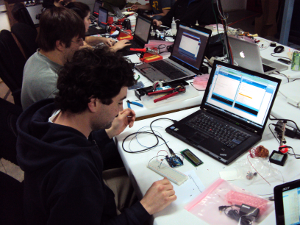 The only new hardware component introduced this week will be the servo. I’ll have a small quantity of servos available for sale on Sunday for $12 ea. For class you will need only one servo, however there is the option to use more than that for your own experiments.

Who: everyone (members and non-members are welcome), seating is limited to 10 people. Reservations are preferred but not required.
Cost: $12 for a servo, unless you bring your own
When: 3/18/2012 12:30-2:30pm  (Please note the time change.)
Reservations: email ed at kineticsandelectronics dot com
Where: Pumping Station: One 3354 N Elston Ave Chicago, IL 60647 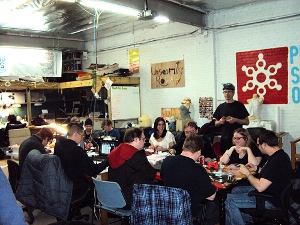 The second meeting of the Intro to Arduino Class will be Sunday March 4 at 3pm. There are 10 seats available, but observers are welcome after the 10 seats are filled. In the first meeting, we learned about soldering and reading circuit diagrams by making an Arduino work-alike from raw components and a blank proto-board.

In the second class we’ll

If you weren’t at the first meeting and therefore don’t have a copy of the board we made, you can still participate by bringing your own Arduino or Arduino-compatible.

The session-2 kit has a breadboard, LCD character display, heavy duty 5-volt adapter, and a couple of other things. If you attend, you should purchase the kit. Price for the session-2 kit is $29.00

I’ll take reservations by email and payment for the kit on site.

That’s probably all that will fit in two hours. Last time we ran significantly overtime. This time, we’ll keep it to two hours.

Who: everyone (members and non-members are welcome), seating is limited to 10 people. 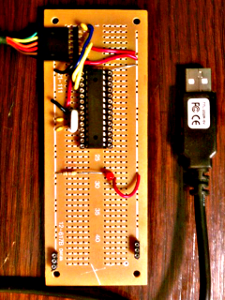 There will be an intro-level Arduino class next Sunday 2/19/12 from 3-5pm in the big room. The emphasis is on understanding circuits and hooking stuff up.

This will be a 4-part series or so. There are 10 seats available, but observers are welcome after the 10 seats are filled.

I’ll have a kit for sale on site to get people started. Price is $29.00. It has a board, chip, USB adapter, LED’s, and a couple of other things to get you started. Because I’ll be packaging the kits for the occasion, I ask that if you attend, you purchase the kit.

I’ll take reservations by email and payment for the kit on site or by Paypal.

The first session (2/19) basic description is:

That’s probably all that will  fit in two hours.
Future sessions may discuss Arduino-compatible accessories, motors, simple sensors, and so on. There are many possibilities.

Who: everyone (members and non-members are welcome), seating is limited to 10 people

Cost: $29 for the kit. Email ed at kineticsandelectronics dot com to reserve and to arrange payment.